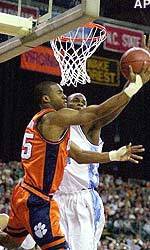 The pairings for the third annual ACC/Big Ten Challenge have been set, and the event will once again feature some of the top college basketball programs in the country battling for conference supremacy and the Commissioner’s Cup. The nine-game Challenge will be televised by ESPN, ESPN2 and ESPN Regional Television on Tuesday and Wednesday, November 27 and 28 from seven different college campuses and two neutral sites. The Challenge will feature three of last year’s NCAA Final Four (Duke, Maryland, Michigan State), the past two NCAA Champions, Duke (2001) and Michigan State (2000), and only the second meeting between Indiana and North Carolina since 1988.

ESPN and ESPN2 will each present doubleheaders on both days of the event. The ninth game will be produced and syndicated by ESPN Regional Television in the markets of the competing teams, it will also be offered nationally through ESPN FULL COURT (out-of-market pay subscription package).

2001 ACC/Big Ten Challenge Notes: * Conference Champs Meet: Defending National Champion and ACC Tournament champion and regular-season co-champ Duke will square off against Big Ten Tournament champion Iowa at the United Center in Chicago, one of two neutral site games in the Challenge. * Indiana vs. UNC: When Indiana meets North Carolina in Chapel Hill, N.C., it will be only the second matchup between two of the most storied men’s college basketball programs since 1988 (Indiana defeated North Carolina 82-73 in the 1999 Jimmy V Classic). The Tar Heels boast the 3rd most NCAA Tournament appearances (34), 2nd most Tournament victories (80) and most Final Four appearances (15) of any team. The Hoosiers rank 4th (29), 6th (51) and 7th (7), respectively in the same categories. Indiana leads the all-time series, 6-4. * Challenge Firsts: Both Indiana and Ohio State will appear in the ACC/Big Ten Challenge for the first time in the event’s three-year history. * ACC Looks for Three in a Row: Last year, the ACC took home the Commissioners Cup, finishing with a 5-4 edge in Challenge victories for the second straight year. * Other highlights include: Big Ten regular-season co-champion Illinois playing at ACC power Maryland…the other neutral site contest (in addition to Duke/Iowa) between Big Ten regular season co-champion Michigan State and Virginia at the Richmond Coliseum in Richmond, Va….Minnesota at Wake Forest and new coach Skip Prosser…Wisconsin and new coach Bo Ryan at Georgia Tech.

* Syndication by ESPN Regional Television. Also offered nationally by ESPN FULL COURT. Date/time will be determined at a later date.

Jim Delany, Big Ten Commissioner, on the Challenge: “We look forward to the third year of the ACC/Big Ten Challenge. The first two years were outstanding for the players, coaches and fans as the event provided an opportunity for two of the outstanding basketball conferences in Division I to challenge each other. It is also a great way for players and coaches to evaluate their teams early in the season. When the Challenge was initiated two years ago, we had very high expectations and they have been fulfilled. We believe the third edition will be just as successful.”

John Swofford, ACC Commissioner, on the Challenge: “The ACC/Big Ten Challenge has developed into one of the most anticipated events of the early college basketball season. The Challenge provides our teams with outstanding television exposure and the opportunity to play top-caliber opponents prior to conference play. We are excited to be partners with the Big Ten, another conference which has a great basketball tradition and ESPN.”