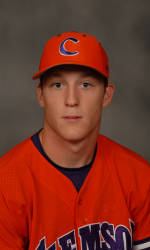 Four Tigers hit home runs in #20 Clemson’s 7-6 win over Boston College in the first game of a doubleheader at Eddie Pellagrini Diamond on Saturday. The Tigers, who evened the series 1-1, improved to 17-7 overall and 6-5 in the ACC. Boston College fell to 15-8 overall and 5-4 in ACC play.

All seven Tiger runs came on its four home runs, as Ben Paulsen, Brad Miller, Jeff Schaus, and Phil Pohl all hit homers to lead Clemson’s 11-hit attack. Mike Belfiore, who hit two homers in the series-opener on Friday, hit two more home runs in the first game of the doubleheader on Saturday to lead the Eagles’ nine-hit output.

Tiger starter Casey Haman (3-1), a native of South Burlington, VT, pitched a career-long 7.0 innings, allowing seven hits, five runs, and one walk with a career-high nine strikeouts to earn the win. Tomas Cruz pitched the final 2.0 innings to record his second save of the year. Eagle starter John Leonard (1-1) suffered the loss, as he allowed seven runs on eight hits.

The Tigers jumped out to a 2-0 lead in the top of the first inning. Mike Freeman hit a one-out single to left-center. Two batters later with two outs, Paulsen lined a two-run homer to right field, his fifth long ball of the season.

In the bottom of the first inning, Robbie Anston led off with a double down the left-field line. After Anston moved to third on Matt Hamlet’s sacrifice bunt, Tony Sanchez belted a two-run homer to center, his seventh home run of the year. Two batters later with two outs, Mike Belfiore followed with a solo home run to left field.

The Eagles added to their lead in the third inning. Matt Hamlet led off with a double to right field. Mickey Wiswall then blooped a single to right-center to score Hamlet.

The Tigers answered with two runs in the fourth inning to tie the score. Paulsen drew a one-out walk. Two batters later with two outs, Miller lined a two-run homer to right-center. It was his second home run of the season.

In the fifth inning, Clemson regained the lead with another two-out, two-run homer, its third of the game. Will Lamb hit a one-out double down the left-field line. Two batters later with two outs, Schaus blasted a two-run homer to right-center, his fourth long ball of the season.

Pohl led off the top of the seventh inning with a towering home run down the left-field line. It was the Cooperstown, NY native’s first career homer.

In the bottom of the seventh inning, Garret Smith led off with a single to center. After Smith stole second, Anston hit a two-out flyball to right-center that fell for a single to score Smith and narrow Clemson’s lead to 7-5.

Sanchez led off the eighth inning with a walk on four pitches. Wiswall then grounded into a double play. Belfiore followed with an opposite-field, solo homer to right-center to cut the Tigers’ lead to one run. It was his second long ball of the game, fourth of the series, and fifth of the season.

Clemson and Boston College will play the second game of the doubleheader and series-finale at Eddie Pellagrini Diamond on Saturday at approximately 2:00 PM.