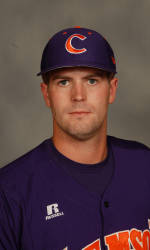 Clemson, ranked #20 in the country, improved to 15-6 with a 5-3 victory over Elon in game one of a doubleheader at Doug Kingsmore Stadium Tuesday. Clemson and Elon, who fell to 12-6 with the loss, will play the second game of the doubleheader at approximately 9:00 PM.

Clinton McKinney (1-0) pitched a career-high 3.0 innings in relief and allowed only two hits with three strikeouts to earn his first win as a Tiger. Matt Vaughn came on in the ninth to record his first save of the year. Elon starter Cory Harrilchak (0-1) took the loss for Elon, as he pitched 6.0 innings and allowed three runs on 12 hits and one walk with two strikeouts.

Brad Miller and Mike Freeman started the bottom of the third inning with infield singles and Ben Paulsen’s sacrifice bunt moved both runners into scoring position. After a Kyle Parker single to centerfield plated Miller, Freeman scored on a wild pitch to give Clemson a 2-0 lead.

Elon answered with two runs in the top of the fourth inning. Mike Melillo hit a one-out single and Chase Austin followed with his first home run of the season to tie the score.

Clemson squandered an opportunity in the bottom of the fourth inning. The Tigers had the bases loaded with no outs and Parker hit a lineout to shortstop Neal Pritchard, who stepped on second base for a double play. Jeff Schaus flied out to centerfield to end the inning.

Clemson took a 3-2 lead in the sixth inning. Addison Johnson reached on an infield single. Miller then singled through the right side to score Sanders.

Clemson added two insurance runs in the eighth inning. Wilson Boyd reached on a passed ball after striking out and John Nester hit his second home run of the year, a line-drive, two-run, opposite-field long ball to give Clemson a 5-2 lead.

Justin Hilt led off the top of the ninth inning with a single and Pritchard singled to right. With two outs, Zeth Stone hit a run-scoring single to right field to cut the Clemson lead to 5-3. But Bennett Davis flied out to right field to end the game.

The teams combined for 27 hits in the game. Elon had 11 different players tally a hit, led by Austin and Pat Irvine with two hits apiece. With a hit in the first inning, Harrilchak extended his hitting streak to 18 games and reached base safely for the 51st straight game. Clemson had eight different players with a hit, led by Miller and Freeman with three hits apiece.