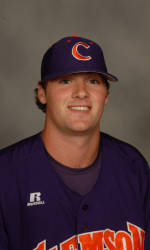 Graham Stoneburner pitched 8.1 strong innings and Ben Paulsen went 4-for-4 with three RBIs to lead #20 Clemson to a 5-3 victory over Boston College in the second game of a doubleheader at Eddie Pellagrini Diamond on Saturday afternoon. The Tigers, who swept the doubleheader and won the series 2-1, improved to 18-7 overall and 7-5 in the ACC. The Eagles dropped to 15-9 overall and 5-5 in ACC play.

Stoneburner (3-2) pitched 8.1 innings, allowing nine hits, three runs, and four walks with six strikeouts to earn the win. Matt Vaughn retired the last two batters with the potential tying run on first base to record his second save of the season. Eagle reliever Kevin Moran (2-1) suffered the loss, as he yielded one run on four hits in 2.0 innings pitched.

Paulsen capped an outstanding series at the plate by going 4-for-4 with a triple, walk, run, and three RBIs to pace the Tigers’ 13-hit attack in the series-finale. His two-run single in the ninth inning built Clemson’s lead to 5-2. In the three-game series, Paulsen was 6-for-10 with four runs, two triples, one homer, five RBIs, and three walks.

Will Lamb added two hits and two runs, while Brad Miller had two hits and two RBIs. Robbie Anston led Boston College’s nine-hit attack by going 2-for-2 with three walks. The Eagles put six leadoff batters on base as well.

The Eagles grabbed a 1-0 lead in the second inning. Mike Belfiore led off with a walk and went to third two batters later on Garret Smith’s single through the right side on a hit-and-run. Mike Sudol then hit a hard grounder right at third-baseman Jason Stolz, who elected to throw to first for the out, as Belfiore scored from third on the play.

In the third inning, Anston led off with a walk on four pitches and moved to second on Andrew Lawrence’s sacrifice bunt, one of four he had in the game. Two batters later, Mickey Wiswall laced a two-out single through the left side to score Anston.

The Tigers responded with a run in the fourth inning. Paulsen hit a one-out triple to right-center and scored on Miller’s single up the middle.

In the fifth inning, John Nester led off with a double over the third-base bag and Chris Epps followed with an infield single. Both runners moved up a base on Mike Freeman followed with a hard-hit ball, but it was right at Belfiore at first for the inning-ending out.

Schaus led off the top of the sixth inning with a single through the left side. Paulsen followed with another single through the left side on a hit-and-run to advance Schaus to third base. Miller then hit a line-drive single to left to plate Schaus. However, with runners on first and second with no outs, the Tigers were unable to push across the go-ahead run, as the next three Tigers were retired.

Belfiore led off the bottom of the sixth inning with a single to left-center and advanced to second on Barry Butera’s sacrifice bunt. Smith followed with an infield single, as Belfiore advanced to third. Sudol was retired on a groundout back to the mound for out #2, as Smith moved to second. Brad Zapenas then hit a liner, but Stolz made a diving stop to his left on a short hop and threw to first for the inning-ending out.

The Tigers took their first lead of the game in the seventh inning. Lamb lined a one-out single to center and moved to second on Freeman’s infield single. Two batters later, Paulsen hit a two-out single through the left side to score Lamb, giving Clemson a 3-2 lead.

In the top of the ninth inning, Lamb led off with a single through the right side. After being down 0-2 in the count, Freeman squared around to bunt on each of the next four pitches, but he took all four for balls and drew a walk. Schaus grounded out, as both runners moved up a base. Paulsen then lofted a two-run single to left-center to plate Lamb and Freeman.

In the bottom of the ninth, Zapenas hit a one-out single to right and Anston walked for the third time in the game. John Spatola followed with a single to left-center to score Zapenas. Vaughn entered the game for the Tigers and struck out Tony Sanchez on three pitches for out #2. Wiswall then grounded out to Miller at short to end the game.

Clemson will travel to Athens, GA to take on Georgia at Foley Field on Tuesday at 7:00 PM.