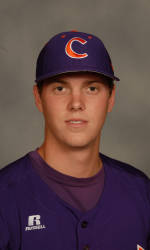 The Tigers scored five runs in the ninth inning, capped by Jeff Schaus’ two-out, three-run homer, to take a one-run lead, but #2 North Carolina responded with two runs in the bottom of the ninth inning to rally for a 9-8 win over #19 Clemson in front of 2,625 fans at Boshamer Stadium on Sunday afternoon. The Tar Heels, who claimed the series 2-1, improved to 10-2 overall and 2-1 in the ACC. Clemson dropped to 6-4 overall and 1-2 in ACC play.

Clemson trailed 7-1 entering the eighth inning and scored two runs in that frame. Then in the ninth inning, run-scoring singles by Ben Paulsen and Wilson Boyd set the stage for Schaus’ dramatic and towering home run to right field with two outs that gave Clemson an 8-7 lead.

But in the bottom of the ninth inning, a bloop single by Kyle Seager and a costly throwing error on a sacrifice bunt put runners on second and third with no outs. Two of the next three Tar Heels slapped run-scoring, groundball singles past a drawn-in infield, capped by pinch-hitter Greg Holt’s walkoff single up the middle, to hand the Tigers a heartbreaking defeat.

For the second game in a row, Clemson grabbed a 1-0 lead in the first inning. Mike Freeman drew a one-out walk and advanced to third on Paulsen’s single through the right side. Boyd followed with a groundout to first that plated Freeman.

In the second inning, Garrett Gore led off with a walk and Seager followed with a single through the right side to move Gore to third. Mark Fleury then grounded into a 4-6-3 double play, but Gore scored on the play to tie the score 1-1.

Another leadoff walk in the third inning proved costly for the Tigers. Mike Cavasinni led off with a walk, advanced to second on Ryan Norton’s sacrifice bunt, and went to third on Ben Bunting’s line-drive single to left-center. Levi Michael followed with a sacrifice fly to left field to plate Cavasinni.

In the fourth inning, North Carolina added two more runs thanks in part to several Tiger miscues. Seager and Fleury both hit one-out, seeing-eye singles to put runners at first and third. Ryan Graepel then blooped a ball into shallow right-center that right-fielder Kyle Parker dropped, allowing Seager to score. Fleury and Graepel both moved up on a wild pitch and Cavasinni walked to load the bases. Two batters later with two outs, Chris Dwyer hit Bunting to score Fleury.

The Tar Heels kept the pressure on in the fifth inning. Gore drew a one-out walk and advanced to third on Seager’s single up the middle. Clemson then had Seager picked off first, as the Tar Heel was going on the pitcher’s first movement. But Seager was safe at second on the stolen base and Gore scored when Paulsen’s throw went into left field. Two batters later, Graepel singled through the right side to plate Seager.

In the seventh inning, Seager walked with one out and advanced to second on Fleury’s groundout. Graepel then doubled to left-center to score Seager, upping North Carolina’s lead to 7-1.

However, the Tigers would not go down quietly. Freeman led off the eighth inning with a walk. Three batters later, Parker blooped a two-out single to left. After Jeff Schaus was hit-by-pitch to load the bases, Matt Sanders lined a single to right field to score two runs.

In the ninth inning, Addison Johnson led off with a single through the left side. Two batters later, Freeman walked and Paulsen followed with a single to right field to score Johnson. Boyd then singled up the middle to score Freeman. Two batters later with two outs, Schaus blasted a three-run homer to right field, giving Clemson an 8-7 lead. It was his second long ball of the series and season.

In the bottom of the ninth inning, Seager led off with a bloop single to left-center that Boyd could not hold onto after making a sliding attempt. Fleury then laid down a bunt halfway between the mound and first base. Harman fielded and wheeled, but his throw to first was errant and went down the right-field line, allowing runners to move up to second and third with no outs. Graepel then grounded a single past the drawn-in infield to score Seager and move pinch-runner Alex White to third base. Two batters later, Holt singled up the middle to score White for the winning run.

Seager paced North Carolina’s 13-hit attack by going 4-for-4 with four runs. Graepel added three hits, including a double, and three RBIs. Paulsen, Schaus, and Sanders all had two hits apiece for the Tigers, who totaled 10 hits in the game.

Clemson will play host to Michigan State at Doug Kingsmore Stadium on Tuesday at 4:00 PM.