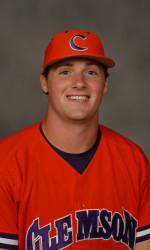 A pair of Tiger errors that led to two runs and Dave DiNatale’s three-run homer in the fifth inning helped #2 Miami (FL) defeat Clemson 7-6 in front of 2,633 fans at Mark Light Field on Sunday. The Hurricanes won their 13th game in a row and improved to 26-2 overall, including 12-1 in ACC play. The Tigers, who suffered their first ACC series sweep since 2006, fell to 18-13 overall and 6-9 in the ACC.

Rene Guerra (1-0) picked up his first career win by pitching 1.1 innings in relief, allowing one hit, no runs, and one walk with one strikeout. Carlos Gutierrez pitched 2.0 perfect innings with three strikeouts to earn his eighth save of the season.

The Tigers jumped out to a 2-0 lead in the top of the first inning. Mike Freeman led off with a walk and went to third on Stan Widmann’s double to left-center. Two batters later, Ben Paulsen singled through the right side to score Freeman and Widmann. Wilson Boyd followed with a hard groundball near the first-base bag, but Yonder Alonso made a nice play that robbed Boyd of extra bases and started a 3-6-3 double play.

The Hurricanes had the bases loaded with no outs in the bottom of the first inning but could only score one run. Leadoff batter Blake Tekotte was hit by Hinson’s first pitch of the game and Jemile Weeks followed with a double down the left-field line to advance Tekotte to third. After Alonso walked to load the bases with no outs, Dennis Raben’s fielder’s choice plated Tekotte, as Alonso was retired at second base. Two batters later, Ryan Jackson hit a two-out grounder that appeared to be headed to left field, but Widmann made a diving stop and threw to first base to retire Jackson in a close play.

Miami capitalized on a Tiger miscue in the third inning to tie the score. Weeks led off with a walk and advanced to second on a wild pitch. After the next two Hurricanes were retired, Ryan Sobolewski hit a routine groundball to shortstop. Paulsen pulled his foot off the bag on Widmann’s throw to first, as an error was charged to Paulsen on the play. Jackson followed with a bloop single to right-center to score Weeks.

Clemson quickly regained the lead in the top of the fourth inning. Boyd drew a one-out walk and scored on Jeff Schaus’ double to right-center. Kyke Parker followed with a walk. Two batters later, Chris Epps hit a two-out single through the right side, but Schaus was thrown out in a close play at the plate to end the inning and keep Miami within one run.

Another Clemson error led to more Hurricane runs in the bottom of the fourth inning. DiNatale led off with a walk and advanced to second on Jason Hagerty’s sacrifice bunt. Tekotte then lofted a flyball near the left-field line that dropped safely off Schaus’ glove, allowing DiNatale to score on the freshman’s first career error. Weeks followed with a double off the wall in left field to score Tekotte.

Hinson’s inability to keep the leadoff batter off base for the fourth time allowed the Hurricanes to add three runs to their lead in the fifth inning. Sobolewski led off with a walk and moved to second on Jackson’s sacrifice bunt. Joey Terdoslavich’s infield single put runners at the corners, then DiNatale hit a three-run homer that just cleared the “365-foot sign” in left-center. The home run, which appeared to be a routine flyball that the strong winds carried out of the park, was his fourth of the season.

Clemson cut into the Hurricanes’ lead with a run in the sixth inning. Boyd led off with a walk and advanced to second on Parker’s groundout. John Nester followed with a sharp grounder up the middle, but Weeks was positioned there and made the throw to first for the inning-ending out.

The Tigers narrowed Miami’s lead to one run in the seventh inning. Freeman led off with a walk, then the next two Tigers struck out looking off reliever Kyle Bellamy. But on a 1-2 pitch, Paulsen lined an opposite-field, two-run homer to left field, his 10th of the season. Bellamy, who made his third relief appearance in as many games, allowed his first run and sixth hit of the season after pitching 22.0 scoreless innings to start the year.

In the ninth inning, Alex Lee led off with a line drive, but it was right at Jackson at shortstop. The next two Tigers were retired on strikeouts to end the game.

Both teams had seven hits apiece, as Weeks paced Miami with two doubles. Paulsen went 2-for-4 with a homer and four RBIs to lead the Tigers.

Clemson will travel to Columbia, SC to take on South Carolina on Wednesday at 7:00 PM in the third of four regular-season meetings.