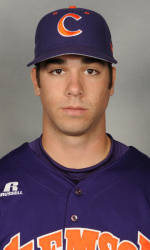 Centerfielder Evan Marzilli’s diving catch of Jay Baum’s liner with the potential tying run on third base and two outs in the 11th inning preserved #2 South Carolina’s 3-2 win over #15 Clemson in front of 5,851 fans at Joseph P. Riley, Jr. Park on Friday night. The Gamecocks, who took a 1-0 series lead, improved to 8-0 on the season and won their 18th game in a row dating to 2011. The Tigers fell to 4-3. All three of Clemson’s losses have been by one run.

In the first game in Charleston between Clemson and South Carolina since the first game of the series in 1899, the Gamecocks held a 1-0 lead until the Tigers tied the score 1-1 on an error in the seventh inning. After the two teams were scoreless over the next three innings, South Carolina used two, two-out singles in the top of the 11th inning to take a 3-1 lead. Clemson capitalized on two Gamecock errors in the bottom of the 11th inning and pulled within one run. But with runners on first and third, Marzilli robbed Baum of a hit to end the game and give the Gamecocks their fifth one-run victory in 2012.

Forrest Koumas (1-0), the second of five Gamecock hurlers, earned the win. In 2.2 innings pitched, he gave up two hits, one unearned run, and one walk with two strikeouts. Nolan Belcher retired the only batter he faced to record his first save of the year. Starter Michael Roth pitched 7.1 strong innings, allowing just four hits, one run, and two walks with seven strikeouts.

Daniel Gossett (0-1) suffered the loss, as he yielded two runs on three hits and one walk with two strikeouts in 1.2 innings pitched. Starter Kevin Brady tossed 6.0 solid innings, allowing only four hits, one run, and two walks with seven strikeouts. Matt Campbell also pitched effectively for the Tigers. In a career-long 3.1 innings pitched, the sophomore righthander surrendered just one hit, no runs, and no walks with three strikeouts.

In the fifth inning, Dominic Attanasio reached on an error with one out and moved to second base on a wild pitch. Garrett Boulware followed with a one-out single up the middle, but Attanasio was thrown out at the plate by Marzilli.

In the seventh inning, Richie Shaffer led off with a walk and moved to second base on Spencer Kieboom’s sacrifice bunt. Jason Stolz followed with a bloop single to center and Shaffer was safe at home when catcher Grayson Greiner was unable to hold on to the ball on the throw from Marzilli. After Attanasio’s groundout moved Stolz to second, Boulware lined a ball headed for centerfield, but Roth deflected the ball right to Chase Vergason at second for the inning-ending lineout.

The Tigers mounted another rally in the eighth inning. Thomas Brittle was hit-by-pitch with one out and Steve Wilkerson reached on an infield single. Two batters later with two outs, Shaffer drew a walk to load the bases, but Kieboom struck out for the inning-ending out, keeping the score tied 1-1. It was Kieboom’s first strikeout of the season.

Walker led off the top of the 11th inning with a walk on four pitches and advanced to second on LB Dantzler’s sacrifice bunt. Pinch-hitter Kyle Martin hit a one-out single through the left side to move Walker to third, then Joey Pankake struck out looking for out #2. But Sean Sullivan came through with a single through the left side to score Walker and give South Carolina the lead. Connor Bright then grounded a single through the right side. Attanasio’s throw from right field was in plenty of time to retire pinch-runner Patrick Harrington at home plate, but the throw short-hopped Kieboom, who could not field the ball, allowing Harrington to score. Kieboom was injured on the collision and was forced to leave the game.

Shaffer lined a leadoff double, the only extra-base hit of the game, down the left-field line in the bottom of the 11th inning. Two batters later, Stolz reached on a one-out error that allowed Shaffer to score. Attanasio struck out for out #2, then Boulware reached on another Gamecock error that moved Stolz to third base. Baum, a pinch-hitter, hit a sinking liner to left-center, but Marzilli made a spectacular diving catch to end the game.

Pankake led the Gamecocks, who had eight hits, by going 2-for-5. All three of South Carolina’s runs came on two-out singles.

Shaffer paced the Tigers by going 2-for-2 with a double, two runs, and three walks, as he reached base in all five of his plate appearances. Wilkerson added two hits for the Tigers, who had six hits in the contest.

Clemson and South Carolina will play game-two of three-game series on Saturday at 2:00 PM at Carolina Stadium in Columbia.