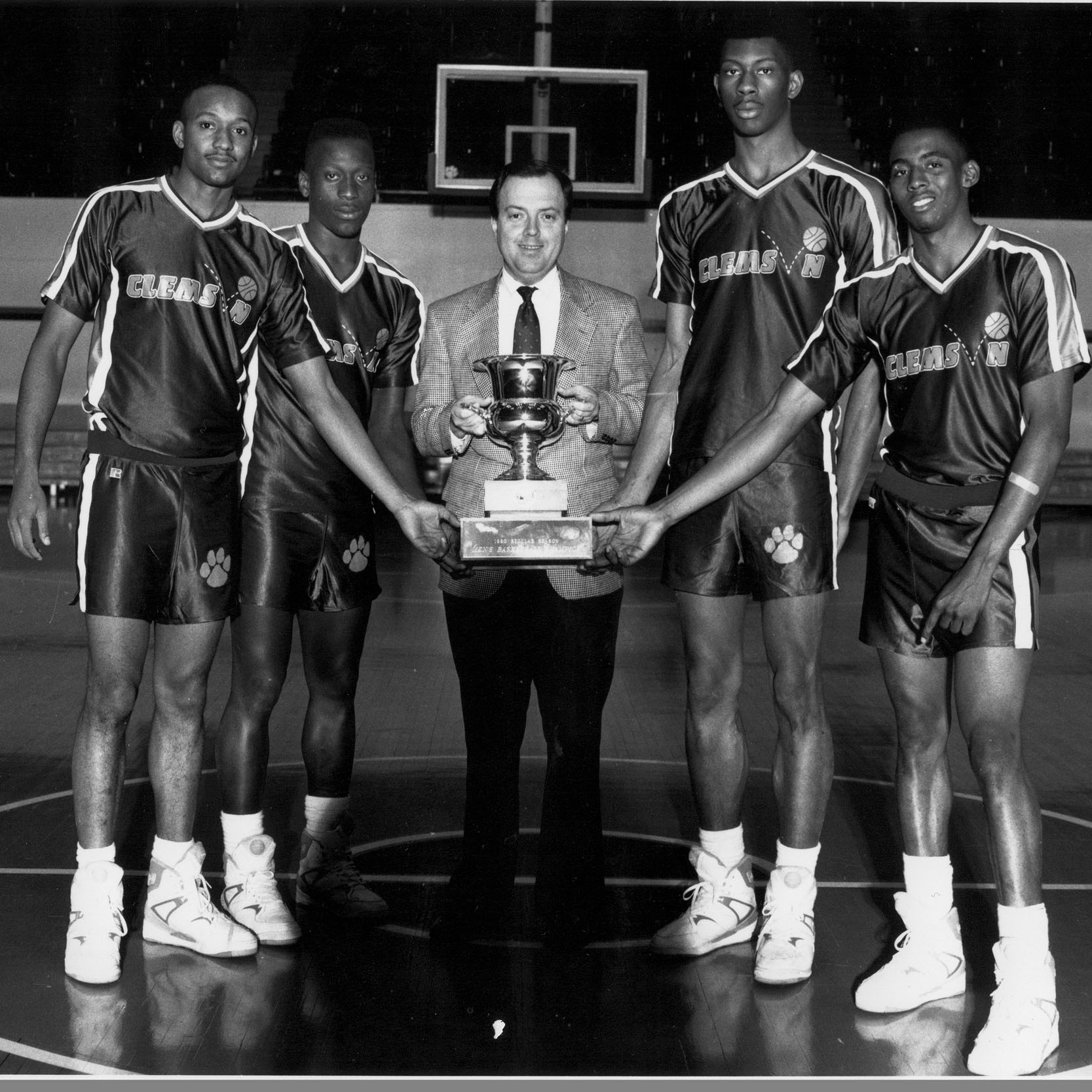 (Note:  Clemson will have its annual Basketball Reunion this weekend.   The 1980 and the 1990 teams will be featured during the festivities.  The following story is about the 1990 team defeating Duke and winning the ACC Regular Season Title.  Clemson’s four seniors along with then Head Coach Cliff Ellis is shown with the 1990 ACC Regular Season Championship Trophy in the photo on the right.)

There was a feeling of anticipation and excitement on the Clemson campus late in February, 25 years ago.

A Tiger victory over fifth-ranked Duke in Littlejohn Coliseum on February 28, 1990, would give #20 Clemson at least a share of the ACC Regular Season Championship. There was a chance for history to be made, as this would be Clemson’s first ACC Championship in men’s basketball.  It was billed as “the most meaningful regular season game in Clemson history.”

Tickets were being scalped, students camped out for prime seats, and the Clemson team would wear orange jerseys that night.

It was a Wednesday night and there was a demand for tickets like never before as the crowd sensed that this would be the Tigers’ big night.   The home crowd wanted to make sure that they would do their part, inspiring the Tigers to victory by being loud all through the game.

It was reported that a record 182 media passes were issued for the game that was televised nationally by ESPN.   An orange pompom was draped across each seat for the fans adding to the color and pageantry.   The 12,500 fans in attendance were not disappointed.

Then Duke lived up to its #5 ranking.   The Blue Devils went on a 14-6 run narrowing Clemson’s lead to 87-86 as Phil Henderson grabbed a loose ball and drove down the court for a dunk with 1:29 left to go.

Starting Clemson guard, Marion Cash converted on two free throws to give the Tigers an 89-86 advantage.   Campbell scored as he gathered a rebound and tipped the ball in from close range, giving the Tigers a five-point lead, 91-86.

Duke’s Bobby Hurley hit a three-pointer from the right side and the Blue Devils were within two points of the Tigers. Young hit both free throws giving the Tigers a 93-89 lead with :27 seconds left.  Robert Brickley made a layup and was fouled by Campbell but he missed the free throw as :19 seconds was showing on the game clock.

The Tigers’ Kirkland Howling hit two free throws with :17 seconds left.   Duke’s Bill McCaffrey hit  a 15-footer on the left baseline and Clemson held a 95-93 lead.      Howling was fouled with four seconds left, and he calmly made both free throws making the score 97-93.   This would be the final score and when the buzzer sounded the Clemson fans stormed the court greeting their heroes. Clemson had made history!  Eventually Clemson won sole possession of first place in the ACC standings.  Tiger Head Coach Cliff Ellis was hoisted on the shoulders of his players. Clemson even cut down the nets with the help of the fans. It was big night and it would go down as one of the biggest regular season victories in Clemson basketball history.

“It’s a perfect ending to a perfect season at home,” Clemson center Elden Campbell said after scoring 22 points and blocking four shots as the Tigers improved to 10-3 in the ACC and 23-5 overall. The win topped a 14-0 home schedule and gave the 20th ranked Tigers 24 straight victories at Littlejohn Coliseum.   “We’ll celebrate tonight, and tomorrow we’ll get ready for the next game.” Two students succeeded in picking up Campbell and carried him to the basket where he helped cut the net down.

“We’re going to enjoy this moment,” said Clemson Head Coach Cliff Ellis.   This is the regular season championship, and I’m proud.  “This is a big win for our program, I thought we played inspired and I think we played with a lot of confidence.   That’s exactly what you want to see when you go down the stretch.

Duke Head Coach Mike Krzyzewski was also impressed by the play of his team and the Tigers in his post game comments.  “It was a great game, I’m just sorry we lost,” said Krzyzewski.  “I was really impressed with our team and the play of Clemson.    There were so many big plays especially down the stretch.  They made them and we did too.

“Cliff has done a great job,” said Krzyzewski.  “The two big guys have really asserted themselves at the highest level.   Dale Davis is exceptional and Campbell is right there with him.   They are good kids and I like their team and how Cliff coaches them.”

The 1989-90 season brought on numerous firsts for the Clemson basketball team.

The Tigers won their first-ever Atlantic Coast Conference regular season championship by posting a 10-4 record.  They also advanced to the Sweet 16 in the NCAA Tournament before losing to UConn 71-70 on a last-second shot.

Clemson defeated LaSalle in the second round of the NCAA tournament to reach the 26-win mark, a school record.  LaSalle had won 22 in a row and was ranked 12th in the nation coming into the game.  Clemson battled back from a 16-point deficit, the largest halftime deficit that the Tigers had ever overcome to claim victory.

The Tigers finished the 1989-90 season with a 24-8 record, still tied for the third most victories in a season by a Clemson team.

Both Dale Davis and Elden Campbell were named first-team All-ACC players, a first for Clemson to have two players named on this elite squad.  Also, Head Coach Cliff Ellis was named ACC Coach-of-the-Year.  The Tigers finished the season ranked 17th in the final AP and UPI polls. Campbell was a first-round pick of the Los Angeles Lakers.

In 1991, Dale Davis was a first-round pick of the Indiana Pacers, the #13 pick of the entire draft.  He finished his career sixth in ACC history and second in Clemson history in total rebounds, with 1216.  He averaged 12.1 rebounds per game, ninth in the nation, and was the recipient of the IPTAY Athlete of the Year.

That evening in late February of 1990 will go down as one of the memorable nights in Clemson athletic history.

“I’m proud and happy tonight for everybody,” said Ellis after the game. “It’s a great time for Clemson.”