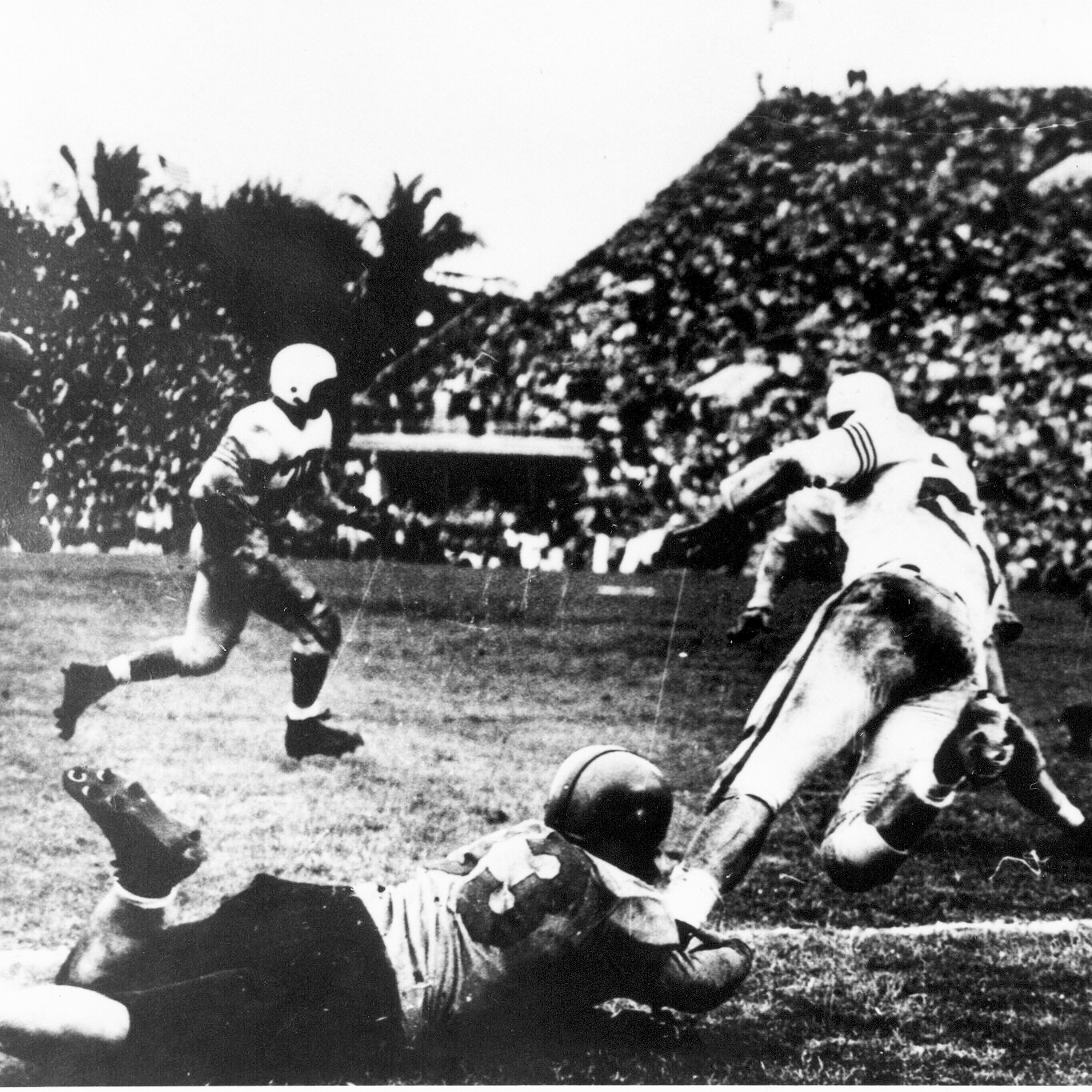 (Editor Note:  We learned that Sterling Smith, who tackled the Miami ball carrier behind the goal line for a safety for the eventual winning margin for Clemson (15-14) in the 1951 Orange Bowl passed away on November 30, 2017.  He is pictured at the end of this story.  The following is a link to his obituary:  http://bit.ly/2kgYFZj )

The Tigers completed an undefeated season in 1950 and Clemson’s  8-0-1 mark and second-place finish in the Southern Conference earned them a bid to play Miami, who was also undefeated at 9-0-1, in the 17th Orange Bowl.

This marked the second undefeated season for the Tigers in three years as the 1948 team finished with an 11-0 record.

It is thought that in this game the Clemson mascot made his first-ever appearance.  (Tiger Mascot with Miami’s Mascot.)

After a scoreless first quarter, Clemson got on track with a 45-yard pass from Billy Hair to Bob Hudson that put the Tigers at the Miami one.  Fred Cone capped the 76-yard drive on third down with a sweep for the score and Radcliff tacked on the extra point.

Clemson mounted a six-play, 70-yard drive in the third quarter for its second touchdown.  Hair threw a 31-yard pass to Ray Mathews, who, as the papers said, “made a circus catch with two men on his back,” to move the Tigers to the Miami 28.  Hair tossed a pass to Glenn Smith at the Miami seven and Smith scrambled in for the score.  Radcliff’s extra point try was blocked.

Miami caught fire two minutes later when Jack Delbello intercepted a pass in the Clemson end zone and returned it to the 40, and then a 10-yard penalty was assessed the Tigers for unnecessary roughness.  On the next play, Frank Smith ran a reverse for 45 yards to move to the Clemson five.  Harry Mallios took a pitch from quarterback Bob Schneidenbach in for the score and Gordon Watson added the conversion.

Miami went 95 yards in five plays for its second score in the third quarter.  Ed Lutes caught a pass at midfield and rambled down to the Clemson 17 before he was stopped.  On fourth down, Jack Hackett threw to Frank Smith for the score and Watson’s point put Miami in the lead for the first time, 14-13 .

Mallios’ 80-yard punt return was called back and two clipping infractions and one unnecessary roughness penalty put Miami in a deep hole with six minutes left in the game.  Frank Smith took a pitch-out from Hackett, but before Smith could get out of the end zone, Sterling Smith, a defensive guard for Clemson, tripped him up for a safety, and Clemson led 15-14. Don Wade ended the last Miami threat with an interception, his second of the game, and Clemson ran out the clock for the win.

“I charged across the line and I grabbed the Miami runner and held on for dear life until he was down” said Sterling Smith in an earlier interview.  “It was the most memorable tackle in my career.”

This was Fred Cone’s last game as a Tiger. The senior from Pineapple, AL finished the season with 184 carries for 845 yards and 15 touchdowns, all school single season records at the time.   Also he became Clemson’s first 2,000-yard rusher (2,183), and his 31 career touchdowns were also a school best, as were his 189 points scored.   He had a seven-year career with the Green Bay Packers and was later inducted into their Hall of Fame in 1974.   He was also a member of the Dallas Cowboys in their first year of existence in 1960   He returned to Clemson as its chief recruiter for 10 years beginning in 1961.

(All Smiles–Fred Cone, Sterling Smith, and Frank Howard are pictured in the Tiger Lockerroom after Clemson’s 15-14 victory over Miami in the 1951 Orange Bowl.)

Later on, Cone was selected as a charter member of the Clemson Athletic Hall of Fame in 1973 and was also chosen as a Ring of Honor member in Clemson’s Memorial Stadium.

This 1951 Orange Bowl is one of the most memorable games in Clemson football history.