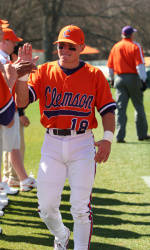 After missing the entire 2008 season due to injury, sophomore Addison Johnson returned to the Tiger lineup with a game-high three hits and #19 Clemson stole nine bases en route to an 8-3 victory over Charlotte in the season-opener in front of 4,968 fans at Doug Kingsmore Stadium on Friday. The Tigers moved to 1-0 with the victory and the 49ers fell to 0-1.

The nine stolen bases were the most by the Tigers in a game since April 19, 1989, when Clemson stole 10 bases in a 16-5 win over Georgia Tech. Four Tigers combined for the nine thefts. Johnson had a game-high three stolen bases.

Trey Delk (1-0) was in midseason form against the 49ers, as he worked 5.1 innings, allowing four hits, one run, and one walk with five strikeouts. Charlotte starter Joe Yermal (0-1) took the loss, as he allowed three runs in 2.1 innings pitched.

Rob Lyerly started the scoring for Charlotte when he belted his first home run of the season to right field in the first inning.

Johnson led off the bottom of the first with a single up the middle. Three batters later with Johnson on third, Kyle Parker hit a two-out single through the right side to score Johnson.

Johnson led off the third inning with an infield single, and then stole second and third. After a Ben Paulsen walk, Parker grounded a double over the third-base bag to score Johnson and Paulsen. Wilson Boyd followed with a line-drive single to left field. Parker was held at third on the throw to home and Boyd advanced to second. Jeff Schaus walked to load the bases and chased Yermal from the game. Charlotte avoided further damage when reliever Tim Lysaught came in and induced Brad Miller into an inning-ending double play on his first pitch of the game.

The Tigers added three unearned runs in the bottom of the fifth thanks to three Charlotte errors and six stolen bases. During the inning, three different Tigers each stole two bases.

Jason Stolz started the scoring in the bottom of the sixth inning when he reached on an error by shortstop Justin Roland. Following a bunt single by Johnson, the Tigers added to their lead on a double steal to score Stolz. Freeman then plated Johnson on a sacrifice fly to deep right field.

Pinch-hitter Michael Gyoerkoe hit his first career home run in the top of the seventh inning to cut into Clemson’s lead.

Charlotte added a final run in the top of the ninth when Gyoerkoe hit a two-out single and Cory Tilton drove him in with a double down the left-field line to cap the scoring for the game.

Clemson and Charlotte will play the second game of the series on Saturday at 2:00 PM.