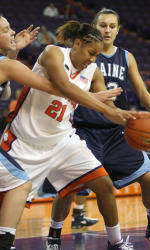 Michigan State is now 6-1 on the year, while Clemson falls to 4-4 this season. Michigan State is ranked 20th by the Assocated Press poll and 19th by USA Today. DeHaan was 11-19 from the field and had four blocked shots for the Spartans. Clemson was led by April Parker with 13 points and D’Lesha Lloyd with 10 points.

In the first half, Clemson took a 12-8 lead with 13:19 remaining on the clock as D’Lesha Lloyd hit two free throws. From this point in the game, Michigan State went on an 18-4 run and took a 26-16 lead with 4:51 remaining in the first half. In this stretch Clemson went scoreless for 5:06. In this Spartan rally, Allyssa Wulff had six points.

In the second half, the Spartans maintained their lead and built a 58-37 advantage with 8:18 remaining. From this point, Clemson scored eight unanswered points to narrow the lead 58-45 with 5:57 left as Christy Brown hit a jumper for the Tigers. This would be the closest the Lady Tigers would come.

Clemson will play at Arkansas on Sunday, December 2 at 2:00 p.m. in Fayetteville, Ark. in the Lady Tigers’ next action.