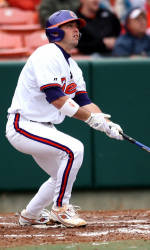 Clemson, ranked #19 in the country, rallied from a 5-0 deficit in the seventh inning to defeat Charlotte 6-5 in 10 innings on Sunday in front of 3,730 fans at Doug Kingsmore Stadium. The Tigers, who swept the three-game series from the preseason Atlantic 10 favorites, improved to 3-0 on the season, while the 49ers fell to 0-3.

Wilson Boyd delivered a walkoff single to right-center with two outs in the 10th inning that scored Kyle Parker. It was the Tigers’ first walkoff hit since June 1, 2007 in a 3-2 win over Saint John’s in the first game of the 2007 Myrtle Beach (SC) Regional. Boyd was also involved in that play, as he scored the winning run on Brad Chalk’s single.

Tiger reliever Ryan Hinson (1-0) earned the win by facing the minimum in 2.0 scoreless innings pitched with two strikeouts. Sam Pierce (0-1) suffered the loss for the 49ers, as he allowed two runs (one earned) in 2.2 innings pitched.

Charlotte got on the board in the top of the second inning. With one out, Grant Bomann reached on a single to shortstop and advanced to second on a passed ball. Justin Roland then hit a single through the right side to score Bomann and give Charlotte a 1-0 lead.

The 49ers extended their lead in the top of the fourth inning. Corey Shaylor started the rally with a one-out single. Zane Williams then doubled down the left-field line to plate Shaylor.

Michael Gyoerkoe started off the top of the fifth inning with an infield single. After Cory Tilton sacrificed Gyoerkoe to second, Rob Lyerly followed with a homer to center, his second of the year, to give Charlotte a 4-0 lead.

Shaylor led off the top of the sixth inning with a single to right-center. After Bomann doubled down the left-field line, Roland plated Shaylor on a groundout to shortstop to extend the 49er lead to 5-0.

Ben Paulsen put the Tigers on the board with a solo home run, his first of the season, to lead off the bottom of the seventh inning. Pinch-hitter Jeff Schaus followed with a single. Two batters later, Brad Miller followed hit his first career home run, a two-run, opposite-field shot to left field, to cut the Charlotte lead to 5-3.

The Tigers tied the score with two unearned runs in the bottom of the eighth inning without the benefit of a hit. Kyle Parker sacrifice bunt moved both runners into scoring position. Johnson scored on a wild pitch by Pierce and Freeman advanced to third base. After a Paulsen walk, Schaus hit a fielder’s choice to the shortstop, allowing Freeman to score the tying run. Tilton kept the score tied by making an inning-ending catch just before crashing into the centerfield fence on a ball hit by Boyd.

In the bottom of the 10th inning, Parker drew a two-out walk and Paulsen followed with a single through the right side. After Schaus walked to load the bases, Boyd hit a walkoff single to right-center to score Parker.

Charlotte freshman Tyler Pilkington, making his first career appearance on the mound, pitched 6.0 strong innings, but he did not factor in the decision. He allowed just three hits, one run, and one walk with nine strikeouts.

In the three games, Tiger pitchers combined for 29 strikeouts against only four walks and held the 49ers to a .225 batting average. Clemson also stole 12 bases and committed just one error in the three-game series.

Clemson will return to action Wednesday when it hosts Wofford at Doug Kingsmore Stadium at 4:00 PM.