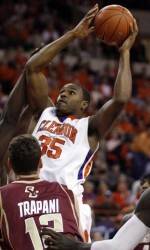  Trevor Booker moved ahead of former Clemson stars Tree Rollins and Cliff Hammonds on the all-time Clemson scoring list when he had 19 points in the win over Boston College. He now has 1475 and needs 25 against North Carolina to become the 10th Tiger player to reach 1500 points.

 Booker is one of just two players ranked in the top 10 in the ACC in both blocked shots and steals.

 Demontez Stitt has made 7 of his last 12 three-point shots and is now shooting .395 for this year. He shot just .274 from 3- point range for his first two years at Clemson. Stitt has scored in double figures in five straight games and 10 of the last 12. He is scoring a career high 10.9 points per game.

 Clemson is coming off a 72-56 win over Boston College. It was Clemson’s fourth straight win by double digits over the Eagles. That ties a Clemson record for consecutive wins over an ACC team by double digits.

 This is the 25th straight poll Clemson has been ranked in the top 25 by at least one of the major polls. This is the second longest streak of top 25 rankings in Clemson history.

 Jerai Grant has made 17 of his last 22 field goal attempts. He scored 11 points at Duke, his high game in an ACC road game, then added nine in the win over Boston College.

 Clemson leads the ACC in steals and ranks in the top 10 in the nation with 11.0 per game. North Carolina is tied for the ACC in lead in blocked shots per game with 7.0. The Tigers are third in the ACC in turnover margin.