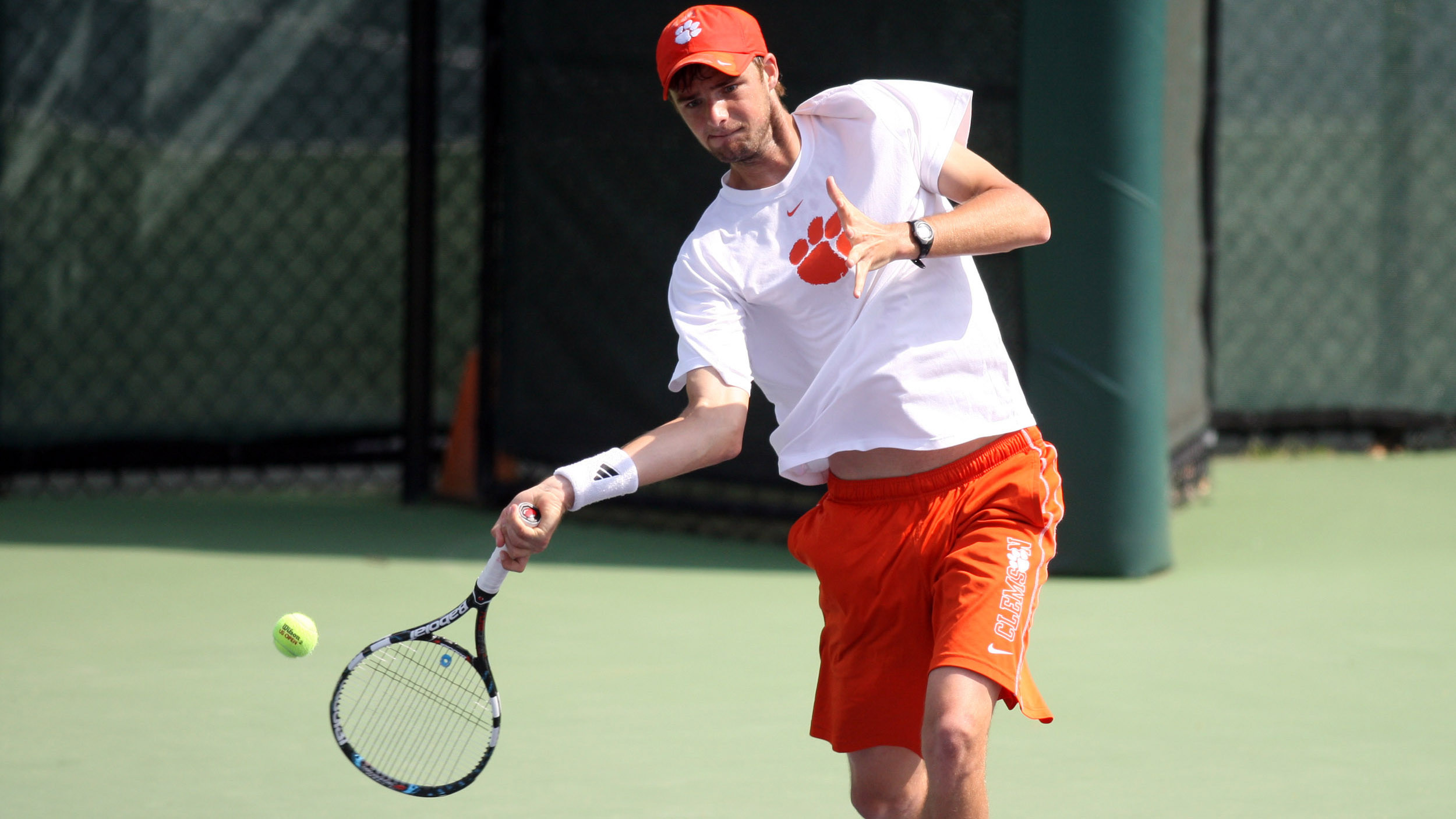 CLEMSON, SC – Clemson won all six singles matches as the 19th-ranked Tigers  defeated North Carolina 6-1 in an Atlantic Coast Conference men’s tennis match at Clemson, SC Sunday afternoon.With the victory, Clemson improves to 15-4 overall and 4-2 in the ACC.  North Carolina falls to 8-11 overall, and 1-5 in league play.This was the first time that the Tigers have defeated the Tar Heels since the 2005 season.  It was also the first time that Clemson has swept all six singles matches against the Tar Heels since April 23, 1989, almost 24 years ago.  In that match, the Tigers defeated North Carolina 8-1 in the finals of the ACC Tournament.Today’s contest was also the 75th match played between the two schools on the tennis courts.   The series first started in 1931.Clemson lost the doubles point to start the match.  William Parker and Nelson Vick of North Carolina defeated the Tigers’ Yannick and Dominique Maden 8-6 at number-one doubles to clinch the team point.  The Madens are ranked 17th as a doubles team.Clemson came back and won all six singles matches.  Dominique Maden defeated William Parker at number-four singles 6-1, 6-1.  At number-two singles, Clemson’s Hunter Harrington defeated Vick 6-3, 6-4 to give the Tigers a 2-1 lead.  Harrington has a 17-7 record this season and is 13-4 in dual matches.Austin Ansari won his 15th match of the year as he downed Stuart DePaolo of North Caorlina 6-2, 3-6, 6-1.  Ansari, a freshman from Greensboro, NC is 15-4 this season in singles and 13-1 in dual matches.At number-one singles, Yannick Maden, ranked 26th nationally, won over the Tar Heel’s #38 Esben Hess Olesen 6-3, 7-6 as he won his 22nd match of the season.  Yannick Maden is 16-2 in dual matches this year, all at the number-one flight.Zachary Rigsby had a come-from behind victory over North Carolina’s Oystein Steiro 6-7, 6-4, 7-6 at number-five singles.  Clemson’s Gerardo Meza defeated Brett Clark at number three-singles in the last match off the court today by the scores of 6-7, 7-5, 6-4.”That was a great win for us,” said Clemson Head Coach Chuck McCuen.  It was a huge bounce back from our loss to Duke on Friday.   Our team showed character.  After the doubles point we told them to leave everything out there on the court.  I want to praise all eight of our players.  It was a gritty performance.  I’m proud of all of them.”This was a big win as we build momentum down the final stretch of the season.  I thought we showed a lot of perseverance today.  We competed very well.  North Carolina is a good team and they have a great program.  We have a lot of respect for them.”We must continue to work on doubles,” said McCuen.  “We’re going to work hard in preparation for this weekend.”Clemson will play at number-one ranked Virginia on Friday and at #55 Virginia Tech on Sunday in the Tigers’ next action.#19 Clemson 6, North Carolina 1