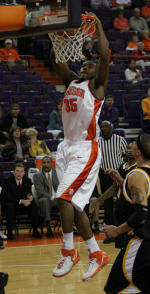  Clemson forward James Mays has played in 25 consecutive Clemson victories, the first 11 games of last year and all 14 games this year. He is currently sixth in the ACC in rebounding, third in steals, ninth in field goal percentage, eighth in blocked shots and fifth in offensive rebounds.

 Clemson is one of three undefeated teams entering Wednesday night’s game. The others are UCLA (12-0) and Oregon (13-0). UCLA and Oregon face each other on Saturday at Oregon.

 K.C. Rivers has scored in double figures in every game this year even though he has not started. His 14-game streak of consecutive double figure scoring games as a reserve is a Clemson record, breaking the previous record of seven in a row by Dale Davis in 1988-89.

 Clemson has won each of its last eight games by double digits, one off the Clemson record for that category.Clemson has 11 of its 14 wins by double digits so far this year and the Tigers have trailed in the second half in just two of the 14 games.

 Clemson has a +8.7 rebound margin, a figure that would be a Clemson record if the season ended today. The Tigers have been out-rebounded just once (Monmouth) in the first 14 games this year.

 Clemson’s 14-0 start is the second best start and second longest winning streak in Clemson history. The only streak that is better is a 17-0 record to open the 1986-87 season.

 Clemson’s #18 national ranking in USA Today is the program’s highest in any poll since the December 28, 1998 rankings when Clemson was 14th in AP and 16th in USA Today.

 Trevor Booker is coming off his first career double-double. The freshman had 15 points and 12 rebounds in the win over Georgia State on Dec. 31.

 Clemson will play its ACC opener on the road at Florida State. Clemson has not won its ACC road opener since the 1996-97 season when it won at Virginia.

 Georgia State is the only common opponent for Clemson and Florida State so far. Clemson defeated the Panthers 67-57 and FSU won 87-55.