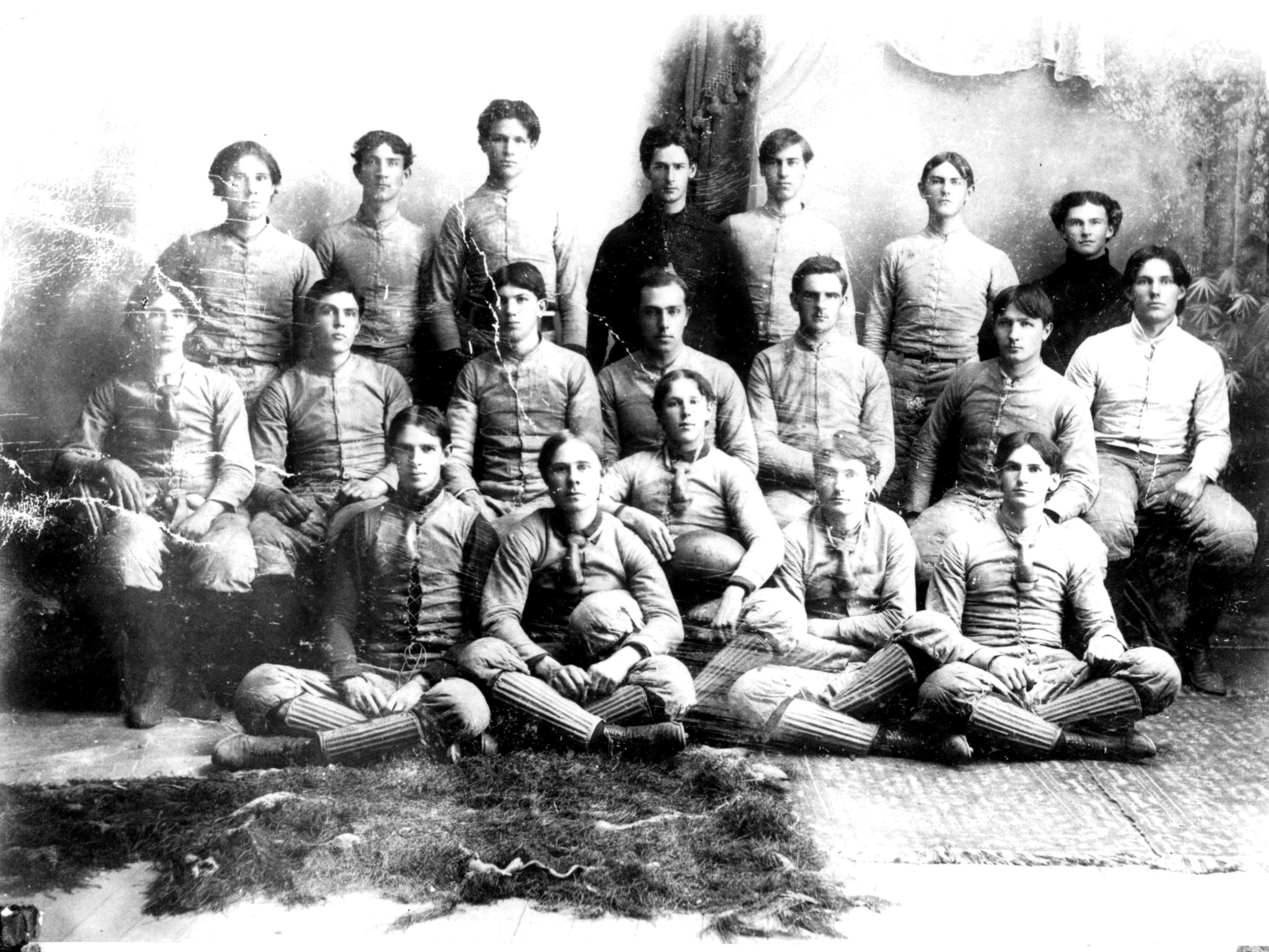 It is interesting to look back and learn about Clemson’s first team in 1896, and the players on this squad. It was a different era, but some things don’t change such as the competitive spirit of the Clemson Tigers and the will to be victorious.

In 1896, the first year of Clemson football, practice did not start until October 5th.  Clemson began practice on a 50×200-foot field in front of the college. It is believed that this field was located in front of what is now the student union building (the area between Tillman Hall and the Trustee House) on campus.    Also, the first football team had training rules to be followed to the letter.  They were as follows:

(1) Will report promptly to all practices prescribed by the coach unless physically disabled or prevented from attending on account of college duties.

(2) That in any of the above instances, we will report the facts beforehand, when possible, to the coach.

(3) That we will not, without the consent of coach and trainer, eat anything at any time except at the training table; will not drink an alcoholic beverage or spirituous liquors or soda water.

(5) Will retire not later than 11:00 p.m. unless permission is granted by coach and trainer or prevented by college duties.

Practice continued and as one description put it “a hardy group of early Tigers who cared little for their skin and bones turned out for practice and began enthusiastically slamming each other to the rock-strewn practice field.”

Without any capital, the team’s first equipment was personal property, but other necessary equipment was purchased with money that was willingly contributed by members of the faculty and student body.

Equipment in the early years consisted of very little padding except at the knees and elbows.  Tightly fitting and laced leather or canvas jackets were the main body protection against the crashing effects of mass plays and left little for a tackler to grab.  A few had nose and shin guards.  These days of helmetless football caused the players to grow their hair long and thick to provide protection for the head.

On October 31, 1896, Clemson traveled to Furman in horse-drawn wagons.  This was the first time that many, if not all, of the Clemson players had seen a full-sized gridiron.

George Swygert, center on the first Clemson football team, recalls the Furman game and the first season as follows:

“With Professor Riggs as our coach, we got in shape fairly well.  Our first game was with Furman, the biggest men I have ever seen, and believe it or not we won that game!  We had a few trick plays.  One was when the play ended near the sidelines, our lightest end would hide the ball under his sweater and as the two teams moved toward the center of the field for the next play, he appeared to be injured, [and] then when things were clear, he would make a bee-line for the goal.  This worked maybe once a game; it worked against Furman.”

Very few details of the 1896 Clemson-Furman game are known, but it is known that Charlie Gentry scored Clemson’s first touchdown in history.

Dr. Rhett Turnipseed, a player on the first Clemson team, in an earlier interview, remembered those first days of football.

“There was three games on our schedule: Furman at Greenville, South Carolina at Columbia and Wofford at Spartanburg.

“We rode horse-drawn wagons to our first football game with Furman. We rode the train to Columbia and Wofford for the other two games. The South Carolina game was played at Elmwood Avenue at the old fairgrounds site. The Furman game was played on their campus and we only had one fight the entire game!

“The coaches of both teams were on the field directing both teams during the Furman game.   “It was the crudest thing you could ever imagine.” Dr. Turnipseed said of the playing. “It was just pure brute force.” Dr. Turnipseed later became a Methodist Minister after graduating from Clemson.

“One Clemson player, John Blaine of Blackstock, S.C. had his ear torn off and was disfigured for life.” said Turnipseed.   “We played hard and we won 14-6.

“Rube Hamilton was our captain and played right halfback and was a great player,” said Dr. Turnipseed.

Frank Tompkins was left half, Arthur Chreitzberg, from Charleston, S.C. was the fullback.  Jeff Maxwell from Anderson was the quarterback.

“The linemen were big fellows, because size and weight counted for everything,” said Dr. Turnipseed.

“There wasn’t much padding,” said Turnipseed. “A few wore nose guards and shin guards.   There was little padding in the trousers.   Laced leather jackets covered the abdomen and there was no headgear.”

Clemson’s upset win over Furman was a monumental milestone for the school.  Furman was considered at the time an experienced team, having played the game since 1889 (the year Clemson was founded).

The first football team and their careers later in life proved to be quite interesting.

A member of Clemson’s first football team, right guard, Alonzo “Shek” Shealy later became head coach of the Tigers in 1904.  He holds the distinction of being the only Clemson player to have coached his alma mater.  Shealy coached Clemson one year and guided the Tigers to a 3-3-1 record overall, which included wins over Alabama, Georgia, and Tennessee. After his playing days at Clemson, he played two years of football at Iowa State while earning a degree in veterinary science. He was a veterinarian in Augusta, Ga.   He also worked for the United States Department of Agriculture and went overseas as an advisor.

It’s interesting to point out that four players on the 1896 team later became physicians.   The first ever captain, Reuben Hamilton was a member of Clemson’s first graduating class in 1896 and graduated from the Georgia Medical College in the class of 1902.

He served in World War I and was awarded the Distinguished Service Cross, Division Citation, and French Croix de Guerre for extraordinary heroism in action. On September 25-26, 1918, he established and maintained a place for the wounded and it became a hazardous position with the enemy advancing, however Hamilton continued treating and evacuating the wounded.

Throughout the day in full view of the enemy and under heavy bombardment, Hamilton continued his work, knowing that the U.S. Troops were withdrawing and the enemy was about to enter the town. He continued his aid to the wounded even after permission to withdraw had been given him by his commanding officers.

Hamilton served in Fairfield County’s health office from March 1920 until 1923 and as malariologist with the S.C. State Board of Health until 1929, when he went with the S.C. Electric and Gas Company as a physician and served until his retirement in 1951.   He passed away in 1962 at the age of 86.   The most valuable player award given annually to the most outstanding Clemson football player is named after Hamilton.

James Cheatham was from Abbeville, S.C., and he was also a physician. He served in the Spanish-American War.   He served 11 months in Cuba. In World War I, he was a Captain and was stationed in San Antonio, Texas. He was ordered to go overseas, but the Armistice was signed on November 11, 1918, just four days before his departure date.   He stayed in Wolfe City, Texas during his career.

He delivered over 4,000 babies during his medical career, including 34 sets of twins. When he retired in 1938, he held the state record for delivering three sets of twins to the same mother.   He did this twice during his career to two different mothers.

In addition, George Hanvey was a Lt. Colonel in the U.S. Army and retired from the military. Jeff Maxwell was an electrical engineer in Los Angeles, CA. George Swygert was an engineer for the United States Navy, and Frank Tompkins was a Lawyer in Columbia, SC.

The first-game victory over Furman on that October 31st afternoon in 1896 set a positive tone for the Tigers and gave them confidence that they too could be successful in this new undertaking–college football.

The 1896 team started the momentum that Clemson would build on for the next several years. 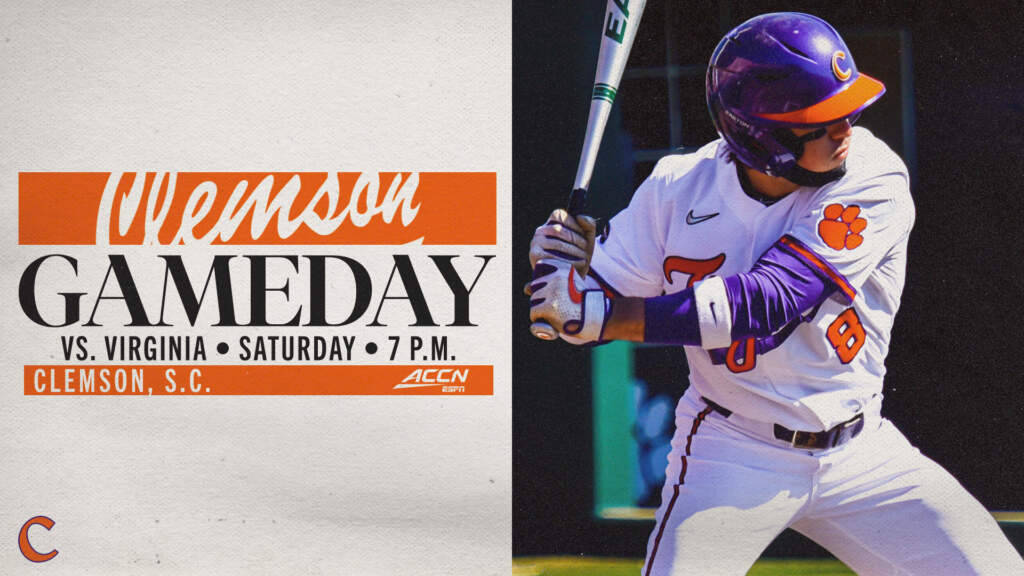