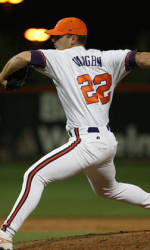 Box Score | Listen to the Radio Broadcast of the Ninth Inning!

Clemson, SC – Justin Sarratt, Scott Weismann, Kyle Deese, Tomas Cruz, and Matt Vaughn combined to pitch a no-hitter in #18 Clemson’s 14-0 victory over USC Upstate at Doug Kingsmore Stadium on Wednesday night. It was the Tigers’ 14th no-hitter in school history and first since the second game of a doubleheader on March 6, 1984, when Scott Parrish no-hit The Citadel in a seven-inning game. It was also just the second no-hitter involving multiple pitchers in Tiger history.

Only two Spartans reached base in the game. The first was in the first inning when a routine flyball was dropped in the outfield. The other came in the eighth inning on a walk. In between, Tiger hurlers retired 19 Spartans in a row. The Tigers turned a double play in the eighth inning, meaning the five Tiger pitchers combined to face just one batter over the minimum.

The Tigers, who won their seventh game in a row, improved to 13-4, while the Spartans fell to 6-11. It was the first-ever meeting between the Tigers and USC Upstate on the diamond. The Spartans had beaten Charlotte 4-3 on the road on Tuesday night to snap the 49ers’ 10-game winning streak.

Sarratt (3-0) earned the win, as he did not allow a walk and had two strikeouts in 5.0 innings pitched in a starting role. Weismann, Deese, who was making his first career outing, Cruz, and Vaughn each pitched an inning to close out the game. Spartan starter Austin Moyer (1-4) suffered the loss, as he yielded one hit, two runs (one earned), and two walks in 1.0 innings pitched.

On the offensive side, Clemson totaled 11 hits and was led by Mike Freeman. The junior second-baseman went 4-for-5 with a homer, triple, three runs, a career-high seven RBIs, a walk, and stolen base. Freshman catcher Phil Pohl added three runs.

The Tigers jumped out to a 2-0 lead on only one hit in the first inning. Freeman drew a one-out walk. Two batters later, Kyle Parker reached with two outs on a catcher’s interference. After Jeff Schaus walked to load the bases, Richard Mounce lined a single to center to score Freeman and Parker.

In the second inning, Clemson doubled its lead. Pohl reached on a hit-by-pitch and Brad Miller’s sacrifice bunt advanced both runners one base, Freeman singled to left to plate Pohl. Stolz then scored on a wild pitch.

Miller led off the fourth inning with a single to right-center, stole second, and scored on Freeman’s triple down the right-field line. Freeman then scored on Ben Paulsen’s groundout, upping Clemson’s lead to 6-0.

In the fifth inning, the Tigers added two more runs. Will Lamb blooped a one-out single to left field and went to third on Pohl’s double to left. After Stolz walked to load the bases, Miller plated Lamb with a sacrifice fly to left. Freeman then hit an infield single to score Pohl.

Clemson increased its lead to double-digits in the seventh inning after the first two batters of the frame were retired. Stolz reached on a throwing error and Miller followed with a walk. Freeman then hit a three-run homer just inside the left-field foul pole. It was Freeman’s first home run of the season.

In the eighth inning, Schaus, pinch-hitter Chris Epps, and Addison Johnson led off with walks. Two batters later, Stolz laced a single to left to score Epps. Miller followed with a walk to score Johnson. Freeman’s groundout then scored Pohl.

Vaughn, the Tigers’ senior captain, closed out the no-hitter in the ninth inning. Stolz stabbed a chopper in the hole at third base and threw to first to retire leadoff batter Branden Millhouse. Vaughn then struck out Kyle Simpson swinging for the second out. Vaughn capped off the no-hitter by retiring Eric Guillen on a called third strike to end the game.

Clemson will travel to Tallahassee to take on #24 Florida State in a three-game series starting Friday at 6:00 PM.