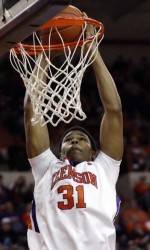 QUICK FACTS  Clemson has won each of the last two games against Duke after losing 22 in a row. Both wins have come against top 10 Duke teams, one in the 2008 ACC Tournament and the other at Clemson last year. The Blue Devils are ranked seventh in both polls entering this game.

 Clemson has not won at Duke since Jan. 4, 1995 when a Tigers team coached by Rick Barnes defeated Duke in Barnes’ first ACC game as Clemson head coach. Duke was ranked ninth in the nation entering that game.

 Clemson is just 4-54 in games played in Cameron Indoor Stadium and 4-56 in Durham overall.

 Both Clemson and Duke are ranked in the top 20 of the USA Today poll. This is the 13th meeting of top 25 teams in the history of the Clemson vs. Duke series. Duke has a 7-5 lead in those games, but Clemson won the last meeting last year by a 74-47 score. Clemson was 10th and Duke 3rd in the nation entering last year’s game at Clemson.

 Trevor Booker has made 17 of his last 21 field goal attempts against Duke and has been a big reason Clemson has won its last two games vs. Duke. Booker needs just 18 points to go into 11th place ahead of Tree Rollins on the Clemson all-time scoring list. Booker has 28 career double-doubles, most among active ACC players.

 Only four players on the current Clemson roster have played against Duke in Cameron Indoor Stadium. That includes Jerai Grant, who has played just one minute in the facility.

 Clemson has won three of its last four ACC openers, including a 91-72 win at Miami last year.

 Freshman Devin Booker has made 20 of his last 29 shots from the field over the last five games and has scored 44 points in those contests.

 Freshman Milton Jennings has made 11 of his last 16 shots from the field and has 13 rebounds in his last 45 minutes of play.

 Freshman Noel Johnson has made 9 of his last 17 three-point attempts.