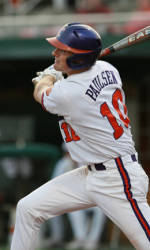 The #17 Clemson Tigers scored three runs in the sixth inning to take the lead and held on for a 7-4 win over Maryland in the first game of a doubleheader at Doug Kingsmore on Sunday afternoon. The Tigers, who took a 2-0 series lead, improved to 32-15 overall and 16-10 in the ACC. The Terrapins fell to 22-26 overall and 6-20 in ACC play.

Tiger reliever Scott Weismann (1-0) earned his first career win. He allowed no hits and one run in 2.2 innings pitched. Matt Vaughn pitched a scoreless ninth inning to record his third save of the season. Maryland starter Brett Harman (3-5) suffered the loss, as he yielded five runs on six hits in 5.2 innings pitched.

The Tigers wasted little time taking the game’s first lead in the first inning. Chris Epps led off with a walk and stole second. Two batters later, Jeff Schaus crushed a two-run homer to right-center into a stiff wind blowing straight in. It was his ninth long ball of the season.

The Terrapins responded with a run in the fifth inning. Dan Benick led off with a bunt single and Gerry Spessard followed with a hit-by-pitch. After Alfredo Rodriguez moved the runners up a base with a sacrifice bunt, Jensen Pupa hit a sacrifice fly to center to score Benick.

Maryland tied the score in the top of the sixth inning when Mike Murphy led off with a home run to left-center, his 11th long ball of the season. Two batters later, Will Greenberg walked and Tyler Bennett singled to right. After Benick’s walk loaded the bases, Spessard grounded out to first as Greenberg scored the go-ahead run.

Ben Paulsen quickly tied the score when he led off the bottom of the sixth inning with an opposite-field home run to left field, his 10th long ball of the season. Kyle Parker followed with a walk but was erased on Wilson Boyd’s fielder’s choice. Boyd advanced to second on Brad Miller’s groundout, then John Nester grounded a two-out single through the left side to plate Boyd. Jason Stolz kept the rally going with an infield single, then Epps singled up the middle to score Nester, giving Clemson a 5-3 lead.

In the top of the eighth inning, David Poutier led off with a walk, went to second on a wild pitch, and advanced to third on Greenberg’s groundout. Bennett followed with a groundout to third that scored Poutier, cutting Clemson’s lead to 5-4. The run ended Weismann’s scoreless inning streak at 17.

The Tigers responded with two runs in the bottom of the eighth inning. Boyd led off with a bad-hop double and Miller walked. Two batters later, Stolz laced a double to left-center to score Boyd. Epps then lofted a sacrifice fly to center to score Miller.

Nester and Stolz led Clemson’s nine-hit attack with two hits apiece, while Epps and Schaus had two RBIs apiece. Pupa and Murphy had two hits apiece for Maryland, who had seven hits in the game.

Clemson and Maryland will play the second game of the doubleheader and series-finale on Sunday at approximately 4:20 PM.