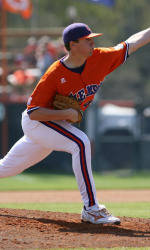 Wilson Boyd gave the Tigers the lead in the second inning when he belted a solo homer to right field, his third long ball of the season.

Clemson added to its lead in the fifth inning with four runs. John Nester lined a leadoff single to right-center and advanced to second on Chris Epps worked the count to 3-2 and lined a triple to right-center to score Nester. Mike Freeman followed with an infield single that scored Epps. Jeff Schaus’ potential inning-ending double-play grounder went through the legs of second-baseman David Poutier, allowing Freeman to score and Schaus to advance to second base on the error. Ben Paulsen then belted a double up the middle that plated Schaus, giving Clemson a 5-0 lead.

In the sixth inning, Brad Miller led off with a double up the middle and advanced to third on the play on centerfielder Dan Benick’s fielding error. Two batters later, Stolz hit a flyball to shallow center that fell for a run-scoring double after Benick lost the ball in the evening sky. Epps then laced a single up the middle to score Stolz.

The Terrapins finally dented the scoreboard in the top of the eighth inning. Tyler Bennett reached with two outs on a dropped flyball by centerfielder Addison Johnson. Gerry Spessard then hit an opposite-field double to left to score Bennett.

The Tigers responded with four runs in the bottom of the eighth inning. Pinch-hitter Richard Mounce led off with a solo homer to right-center, his first career long ball. Freeman followed with a double to left field and went to third on Will Lamb’s groundout. After pinch-hitter Adam Ward walked, Kyle Parker lined a double down the left-field line to score Freeman. Ward later scored on a wild pitch and Miller hit a two-out single to center to score Parker.

In the ninth inning, Jensen Pupa walked with one out. Later in the inning with two outs, Pupa scored on a two-out throwing error by catcher Phil Pohl.

Miller led Clemson’s 15-hit attack with a game-high three hits. Epps added two hits and a game-high two RBIs. Five different Terrapins had one hit apiece to account for their five hits in the game.

Due to the threat of inclement weather on Monday, Clemson and Maryland will conclude the three-game series with a doubleheader on Sunday starting at 1:00 PM. Both games will be nine-inning contests with approximately 45 minutes in between the games.