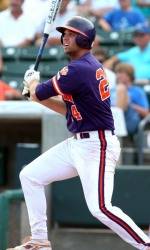 Mississippi State scored eight runs in innings 5-7 to rally for an 8-6 win over #5 Clemson in game-one of the Starkville Super Regional in front of 12,620 fans at Dudy Noble Field on Friday. It was the largest crowd to ever see an NCAA Super Regional game. The #17 Bulldogs, who took a 1-0 lead in the best-of-three series, improved to 37-20 overall, while the Tigers fell to 41-22.

Bulldog reliever John Lalor (3-1) earned the win, as he allowed two hits, one run, and no walks with three strikeouts in 3.0 innings pitched. Aaron Weatherford recorded his fifth save of the season with a scoreless and hitless ninth inning.

After Moskos got out of a bases-loaded, no-out jam without allowing a run in the third inning, Clemson came right back and scored two runs in the fourth inning. Wilson Boyd reached on a throwing error by shortstop Jet Butler. Marquez Smith singled through the right side on a hit-and-run, as Boyd moved to third. Andy D’Alessio followed with a single to right-center to score Boyd, then Taylor Harbin plated Smith with a sacrifice fly to right field.

The Bulldogs tied the score in the fifth inning thanks to the long ball. Brian LaNinfa led off with a single to right. Two batters later, Connor Powers hit a two-run homer to right-center, his eighth of the season.

Clemson responded with three runs on two home runs to regain the lead in the top of the sixth inning. Smith led off with a walk, then D’Alessio lined a two-run homer to right-center, his 17th of the season. It was also his 59th career home run, tying the Clemson career record held by Jeff Baker (2000-02). Harbin followed with a solo homer to left field, his 11th of the season.

In the bottom of the sixth, the Bulldogs scored four runs to take their first lead of the game. Joseph McCaskill led off with a double to right field and Edward Easley followed with a single under the glove of Smith to score McCaskill. Mitch Moreland tied the score with a two-run homer to center. It was his ninth long ball of the season. Brandon Turner then hit a double to left-center and LaNinfa reached on a fielding error by second-baseman J.D. Burgess. After Stephen Clyne entered the game in relief of Moskos, Russ Sneed grounded into a 1-4-3 double play, but Turner scored the go-ahead run on the play.

Mississippi State added two runs in the seventh inning thanks to two two-out doubles. Jeffrey Rea led off with a single through the left side and advanced to second base on pinch-hitter Nick Hardy’s sacrifice bunt. After Easley grounded out for out #2, Moreland doubled to right-center to score Rea. Turner hit another double to right-center to score Moreland, upping the Bulldogs’ lead to 8-5.

Doug Hogan hit a two-out, solo homer to left-center in the eighth inning to narrow Mississippi State’s lead to two runs. For Hogan, who earlier extended his hitting streak to a team-season-long 14 games, it was his 12th long ball of the season.

But after Addison Johnson led off the ninth inning with a walk, he advanced no further, as Weatherford retired the next three Tigers to end the game.

D’Alessio was 2-for-4 with three RBIs, while Hogan added two hits for Clemson.

Clemson will play Mississippi State again on Saturday at 12:00 PM EDT in game-two of the best-of-three series. Clemson will be the home team and occupy the third-base dugout.