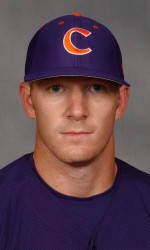 Mississippi State scored four runs in the second inning thanks to a Tiger error and never trailed again to defeat #5 Clemson 8-5 on Saturday in front of 13,715 fans at Dudy Noble Field in the Starkville Super Regional. The #17 Bulldogs advanced to the College World Series with the win and improved to 38-20 on the season. The Tigers ended their season with a 41-23 record.

Starter Justin Pigott (7-6) earned the win, as he allowed nine hits, five runs (four earned), and one walk with three strikeouts in 6.0 innings pitched. Mitch Moreland picked up his second save of the season by retiring the last two batters of the game.

In the top of the first inning, the Bulldogs took a 1-0 lead. Jeffrey Rea led off with a walk on four pitches and Brandon Turner followed with a single through the right side. Edward Easley’s flyball to deep left field moved Rea to third, then Moreland’s groundout to first plated Rea.

Clemson came right back and took the lead with two runs in the bottom of the first. Wilson Boyd hit a one-out single through the right side and Marquez Smith followed with a single to left field. After Andy D’Alessio’s walk loaded the bases, Taylor Harbin hit a deep flyball to left field, allowing Boyd to score on the sacrifice fly. Doug Hogan followed with a two-out single to center to score Smith. The hit extended Hogan’s hitting streak to 15 games.

The Bulldogs responded with four runs in the top of the second inning thanks to a costly Tiger error. Joseph McCaskill led off with a single up the middle. Russ Sneed then hit a potential double-play grounder to short, but Harbin booted the ball. Wyn Diggs followed with a flyball to shallow left-center that fell for a single to load the bases with no outs. Jet Butler lined a double down the right-field line to plate McCaskill and Sneed, and Rea reloaded the bases with a walk. Turner then grounded into a 6-4-3 double play, but Diggs scored on the play. Edward Easley upped the Bulldogs’ lead to 5-2 with a two-out, line-drive single to left to score Butler.

Clemson narrowed Mississippi State’s lead to two runs in the fourth inning when Hogan led off with a solo home run down the left-field line into the wind, his 13th of the season. Two batters later, Addison Johnson reached on an infield single to first base and went to second when the throw went into the dugout. J.D. Burgess followed with a double down the left-field line to score Johnson, cutting Mississippi State’s lead to 5-4.

The Bulldogs got those two runs back in the top of the fifth inning. Moreland led off with a double to left-center and Brian LaNinfa advanced Moreland to third with a flyball to deep left-center. After McCaskill walked, Sneed doubled down the left-field line to score Moreland. Diggs’ groundout to second with the infield playing back plated McCaskill.

In the sixth inning, Johnson hit a one-out triple to right-center and scored on Burgess’ groundout to shortstop.

The Bulldogs added an insurance run in the top of the ninth inning. Nick Hardy hit a one-out triple to right field and scored when Sneed’s pop up fell in shallow center for a single.

In the bottom of the ninth inning, Clemson sent the potential tying run to the plate with one out, but D’Alessio flied out to deep right and Harbin struck out to end the game.

Moreland, McCaskill, and Sneed each had two hits apiece to pace Mississippi State. The Tigers, who outhit the Bulldogs 12-11, were led offensively by Smith and Hogan, who had three hits apiece. Johnson added two hits and two runs scored as well.