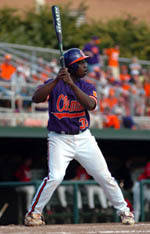 Marquez Smith’s two-run homer highlighted #16 Clemson’s 6-3 win at Virginia Tech in a game that started on Friday and finished on Saturday in front of 205 fans at Engligh Field. The Tigers improved to 21-9 overall and 6-4 in the ACC with the series-opening win, while the Hokies fell to 16-15 overall and 4-9 in ACC play.

Matt Vaughn (3-0) picked up the victory, as he pitched 5.0 innings. The sophomore righthander allowed seven hits and two runs in the longest relief appearance of his career. Lefthander Daniel Moskos made his first career start after starting his career with 71 relief appearances as a Tiger. He allowed six hits, one run, and no walks with four strikeouts in 4.0 innings pitched.

After Clemson had runners at first and third with one out and could not score in the top of the first inning, the Hokies had the same situation in the bottom of the first after Bryan Thomas’ potential routine, double-play grounder to shortstop with one out took a bad hop and enabled Sean O’Brien to reach third base on the single. With flurries starting to fall, Adam Redd followed with a “seeing-eye” single through the right side that scored O’Brien, and Jose Cueto loaded the bases with a sharp single through the left side. Moskos avoided further damage by striking out Warren Schaeffer and getting Anthony Sosnoskie to fly out to right field.

With thick, wind-blown snow falling, the Tigers tied the score in the third inning. Brad Chalk led off with a walk and moved to second when Taylor Harbin was hit by a pitch. Smith moved the runners up a base on a sacrifice bunt and Ben Paulsen followed with a sacrifice fly to left to plate Chalk.

In the fourth inning, Wilson Boyd led off with a line-drive single to right field. D.J. Mitchell then lofted a fly ball to left-center. Centerfielder Nate Parks lost the ball in the clouds and snow, allowing the ball to fall safely for a double, as Boyd advanced to third. J.D. Burgess reached on a fielding error by second-baseman Matt Hacker, as Boyd scored to give Clemson the lead. Addison Johnson then grounded into a double play, but Mitchell scored on the play.

The Tigers tacked on two more runs in the fifth inning. Harbin led off with an infield single and Marquez Smith’s blasted a two-run homer that disappeared into the snowy night over the left-field fence. It was Smith’s fifth homer of the season.

Play was suspended in the middle of the fifth inning due to snow accumulation on the field. The game was resumed on April 7.

When play got underway again, Hacker led off the bottom of the fifth with a single to right field and went to second on Parks’ bunt single. O’Brien moved the runners up on a sacrifice bunt, but Vaughn got out of the jam by retiring the next two Hokies.

In the sixth, the Tigers capitalized on an error to add to their lead. Johnson reached with one out on a strikeout that got by the catcher. Chalk advanced Johnson to second on a sacrifice bunt and Harbin followed with a grounder to short. Schaeffer’s throw to first was low and got by the first-baseman, allowing Johnson to come all the way around to score, giving Clemson a 6-1 lead.

After the first two Hokies were retired in the seventh inning, they put together a two-out rally to cut into Clemson’s lead. Three straight singles by O’Brien, Thomas, and Redd loaded the bases, then Cueto walked to plate O’Brien. Vaughn escaped further damaging by getting Schaeffer to ground out.

In the ninth inning, Virginia Tech rallied to score a run, but it was not enough. Parks led off with an infield and single and O’Brien followed with a walk. The two runners moved up on a balk and Thomas struck out for out #1. Redd’s groundout to second scored Parks, but Cueto’s groundout ended the game.

The Tigers, who had 11 hits, were led at the plate by Mitchell, who had three hits, including two doubles. Smith was 2-for-2 as well. The Tigers totaled five sacrifice bunts, but stranded 12 runners on base.

Virginia Tech, who totaled 13 singles, was led by O’Brien’s 3-for-3 performance. The Hokies left 11 runners on base as well.

Clemson and Virginia Tech will play game-two of the three-game series on Saturday at approximately 2:50 PM.