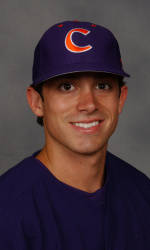 Clemson scored three runs in the ninth inning and held on behind the relief pitching of Alan Farina, as the #16 Tigers evened the series against #2 Florida State in front of 4,846 fans at Dick Howser Stadium on Saturday. The Tigers improved to 33-18 overall and 16-10 in the ACC, while the Seminoles dropped to 43-8 overall, 21-5 in ACC play.

Farina (4-2) entered the game in the fifth inning with the Tigers trailing 6-3 and pitched 4.1 scoreless innings to earn the win. He also allowed just four hits and no walks with six strikeouts against a team leading the nation in batting average (.363) entering the game. It was an especially-memorable day for the Chuluota, FL native, as both his parents graduated from Florida State and the junior righthander grew up a Seminole fan.

Reliever Luke Tucker (0-1) suffered the loss, as he allowed two hits, three runs, and two walks in 0.2 innings pitched. Tucker had not allowed a run in 5.2 innings pitched in 2007 entering the contest.

Wilson Boyd gave Clemson a 1-0 lead in the first inning when he hit a solo homer to right field. It was the freshman’s first career long ball.

In the bottom of the first, Florida State responded with a run to even the score. Tony Thomas, Jr. led off with a double to left-center and Mark Hallberg followed with a walk. Buster Posey’s sacrifice bunt moved the runners up and Jack Rye’s groundout to second scored Thomas.

The Seminoles took the lead in the second inning with two runs. Jason Stidham led off with a triple off the wall in right field. Travis Anderson followed with a bloop single to right field to score Stidham and Mark Gildea reached on a bunt single. Brandon Reichert grounded into a 5-6-3 double play, as Anderson advanced to third base. After Thomas walked, David Kopp had Thomas picked off first after faking to third. But his throw to Andy D’Alessio at first base was wild, allowing Anderson to score.

Rye hit a one-out single in the third inning and scored on Ohmed Danesh’s two-run homer to right-center, his second of the season. Stidham followed with a single to right and went to second on Anderson’s groundout to third. Gildea then lined a two-out single to right to score Stidham, giving the Seminoles a 6-1 lead.

After leaving the bases loaded without scoring in the fourth inning, the Tigers narrowed Florida State’s lead in the fifth inning with two runs. Alex Lee drew a leadoff walk and J.D. Burgess followed with a single through the left side. Burgess was erased on Addison Johnson’s groundout to shortstop, as Lee advanced to third on the fielder’s choice. Boyd struck out for out #2, but Marquez Smith came through with a two-run double down the left-field line to score Lee and Johnson. D’Alessio then ripped a single through the right side, however Smith was thrown out at the plate to end the inning.

Clemson cut further into the Seminoles’ lead in the sixth inning. Ben Paulsen drew a one-out walk and advanced to third on Doug Hogan’s double down the left-field line. Lee followed with a single through the right side to plate Paulsen, while Hogan stopped at third. The Seminoles got out of the inning by inducing a 6-4-3 double play off the bat of pinch-hitter Alex Burg, keeping the score 6-4 in favor of Florida State.

The Tigers rallied to take the lead with three runs in the ninth inning. Boyd drew a one-out walk and went to second on Smith’s single to right-center. D’Alessio followed with a walk to load the bases, then Taylor Harbin tied the score with a double down the left-field line to score Boyd and Smith. Paulsen was intentionally walked to load the bases again, and Hogan hit a hard, one-out grounder to third. Stidham threw to Thomas at second for out #2, but the catcher just beat out the throw to first, allowing D’Alessio to score the go-ahead run.

After Farina retired the first two batters in the bottom of the ninth inning, Posey singled to right field and Rye followed with a single to right-center, as Posey advanced to third. But Farina struck out D’Vontrey Richardson to give Clemson the come-from-behind victory.

Clemson totaled 11 hits, and was led by Smith, D’Alessio, Hogan, and Burgess, who all had two hits apiece. Smith and Harbin each added two RBIs. Tiger batters combined for nine walks as well.

The Seminoles totaled 12 hits and were led by Gildea, who was 3-for-4. Thomas added two hits and a walk, while Rye extended his hitting streak to 17 games with two hits. Hallberg’s 16-game hitting streak came to an end, as he was 0-for-4.

Clemson and Florida State will conclude the series on Sunday at 1:00 PM.