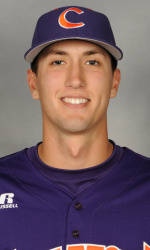 The #16 Clemson Tigers scored five runs in the eighth inning to break a 2-2 tie and defeat UAB 7-4 in the second game of a doubleheader in front of 5,608 fans at Doug Kingsmore Stadium on Saturday afternoon. The Tigers, who won both games of the doubleheader and won the series 2-1, improved to 2-1 on the season, while the Blazers dropped to 1-2.

Clemson was unable to score after putting runners at first and third with no outs in the first inning, then UAB took the game’s first lead in the second inning. Busby led off with a double to left-center and advanced to third on Jeff Schalk’s single through the right side. After Keith DePew loaded the bases with a hit-by-pitch, Jacob German singled up the middle to score Busby. Thomas Brittle’s throw from center was in time to retire Schalk at the plate for out #1 on the play. Both runners moved up a base on a stolen base, but the next two Blazers were retired to keep Clemson within one run.

The Blazers doubled their lead in the third inning. Coy Arrowood led off with a hit-by-pitch, stole second, and advanced to third on Harry Clark’s groundout to second. Arrowood then scored on Patrick Palmeiro’s groundout to third.

In the fifth inning, Jon McGibbon led off with a single to right-center after Busby had retired the previous 11 batters. Two batters later, Jason Stolz reached on an error, then Garrett Boulware laced a single, his first career hit, through the left side to score McGibbon.

Pohl led off the seventh inning with a solo home run to left field, his first long ball of the season, to tie the score 2-2.

In the eighth inning, Jay Baum and Brittle led off with walks, then Brad Felder loaded the bases on a hit-by-pitch with no outs. Richie Shaffer then walked on five pitches to score the go-ahead run in Baum. Pohl followed with a single up the middle to score Brittle and Felder, then McGibbon lofted a sacrifice fly to left field to score Shaffer and move Pohl to second. Spencer Kieboom lined a single to right field to plate Pohl.

The Blazers put together a rally in the ninth inning. German led off with an infield single and went to third base on pinch-hitter Ryan Prinzing’s double to left-center. Ivan De Jesus singled up the middle to score German, but De Jesus was thrown out at second after the throw came to home plate. On the play, Brittle was credited his third assist of the game. Two batters later with two outs, Clark reached on an error, but Palmeiro popped up to second for the game-ending out.

Clemson will return to action on Friday when it hosts Maine, Head Coach Doug Kingsmore Stadium. First pitch on Friday is scheduled for 4:00 PM.