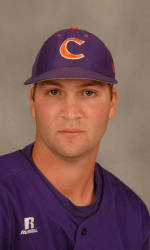 Relievers Andrew Carraway and Kevin Arico combined to pitch 5.1 scoreless innings of one-hit ball to lead #15 Virginia to a 6-5 victory over #13 Clemson in front of 1,639 fans at Durham Bulls Athletic Park in the ACC Tournament on Thursday night. The Cavaliers, who won in their first game of the round-robin tourney, improved to 40-12-1 overall. The Tigers, who were also playing their first tourney game, dropped to 39-18 overall. Clemson’s five-game winning streak also came to an end.

Carraway (6-1), a weekend starter during the regular season who was making his first relief appearance of the year, earned the win. He pitched 4.1 innings, allowing just one hit, no runs, and no walks with seven strikeouts. Arico pitched a perfect ninth inning with a strikeout to record his ninth save of the season. Starter Matt Packer, Carraway, and Arico combined to strikeout 13 batters, the most times Clemson has struck out in a game this season.

The Tigers took the game’s first lead for the 12th game in a row. Kyle Parker led off the second inning with a bloop single to left-center and went to second on Wilson Boyd’s infield single. After John Nester’s sacrifice bunt moved both runners up a base, Brad Miller reached on a fielding error by first-baseman John Hicks as Parker scored on the play.

In the third inning, Mike Freeman and Jeff Schaus led off with line-drive singles. Ben Paulsen then reached on a sacrifice bunt back to the pitcher to load the bases with no outs. Two batters later, Boyd laced a single to right field to score Freeman and Schaus. Nester followed with a sacrifice fly to right-center to plate Paulsen, giving the Tigers a 4-0 lead.

The Cavaliers cut Clemson’s lead in half in the top of the fourth inning. Steven Proscia led off with an infield single and John Hicks followed with a two-run homer down the left-field line, his seventh long ball of the season.

In the bottom of the fourth inning, Chris Epps led off with a double down the left-field line and stole third. Freeman followed with a sacrifice fly to right field to score Epps.

Jarrett Parker led off the fifth inning with an opposite-field home run to left field, his 16th long ball of the year. Two batters later, Danny Hultzen hit an infield single, stole second, and went to third when Nester’s throw went into centerfield. Dan Grovatt singled up the middle to score Hultzen, then Proscia tripled to left-center to score Grovatt. Proscia also scored when Miller’s throw to third base was errant, giving the Cavaliers a 6-5 lead.

Boyd went 2-for-4 with two RBIs to lead Clemson, who had seven hits. Jason Stolz’s 10-game hitting streak came to an end after going 0-for-4. The Tigers were just 1-for-9 with runners in scoring position as well.

The matchup was the first between Clemson and Virginia since 2007, as the two did not meet during the regular season in 2008 or 2009. Despite the loss, the Tigers have still won 14 of their last 18 games, as the four losses during that span have been by a total of five runs.

Clemson will play #7-seed Duke on Friday at 4:00 PM. For the Tigers to advance to the ACC Tournament Championship game against #1-seed Florida State on Sunday, they must win their two remaining games in the ACC Tourney and Virginia must lose its final two games.