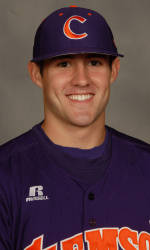 GREENVILLE, SC – John Hinson, Wilson Boyd, and Mike Freeman all hit home runs to lead #15 Clemson to a 10-2 victory over Michigan State in front of 3,563 fans at Fluor Field on Saturday afternoon. The Tigers improved to 2-0, while the Spartans fell to 1-1. Clemson also moved to 6-0 all-time at Fluor Field.

Tiger starter Scott Weismann (1-0) earned the win. In 4.2 innings pitched, he allowed six hits, two runs, and one walk with a career-high six strikeouts. Will Lamb pitched 2.1 scoreless innings of one-hit ball, while freshman righties Jonathan Meyer and Scott Firth both pitched a scoreless inning to close out the game.

Clemson dented the scoreboard in the second inning with four runs. Kyle Parker led off with a hit-by-pitch and moved to second on Boyd’s single to left field. Two batters later, Richie Shaffer laced a single to right field to score Parker. Hinson followed with a long three-run homer to right field in his first official at-bat of the season. Hinson, a red-shirt sophomore, missed all of 2009 due to injury.

In the bottom of the second inning, Jonathan Roof led off with a home run to left field, his first long ball of the season. It was also the first run allowed by Clemson in 2010.

Michigan State cut further into Clemson’s lead in the fifth inning. Bo Felt led off with a single to left field. After the next two Spartans struck out and Seth Williams walked, Brandon Eckerle doubled to right-center to score Felt. But reliever Will Lamb got Eli Boike to ground out with runners on second and third to end the frame.

Clemson responded with two runs to take a 6-2 lead in the sixth inning. Parker drew a one-out walk and Boyd followed with a two-run homer down the right-field line. It was Boyd’s first home run of the season.

Another long ball enabled the Tigers to up their lead in the seventh inning. Chris Epps both walked with one out. Freeman then blasted a three-run homer to right-center, his first long ball of the season.

The Tigers reached double-digits in runs in the ninth inning. Freeman hit a two-out double off the wall in left-center. After Jeff Schaus was hit-by-pitch for the second time in a row, Parker lined a single to left-center to plate Freeman.

Roof and Felt had two hits apiece for the Spartans, who had eight hits in the game.

Clemson will return to Doug Kingsmore Stadium to take on Furman on Sunday at 2:00 PM.