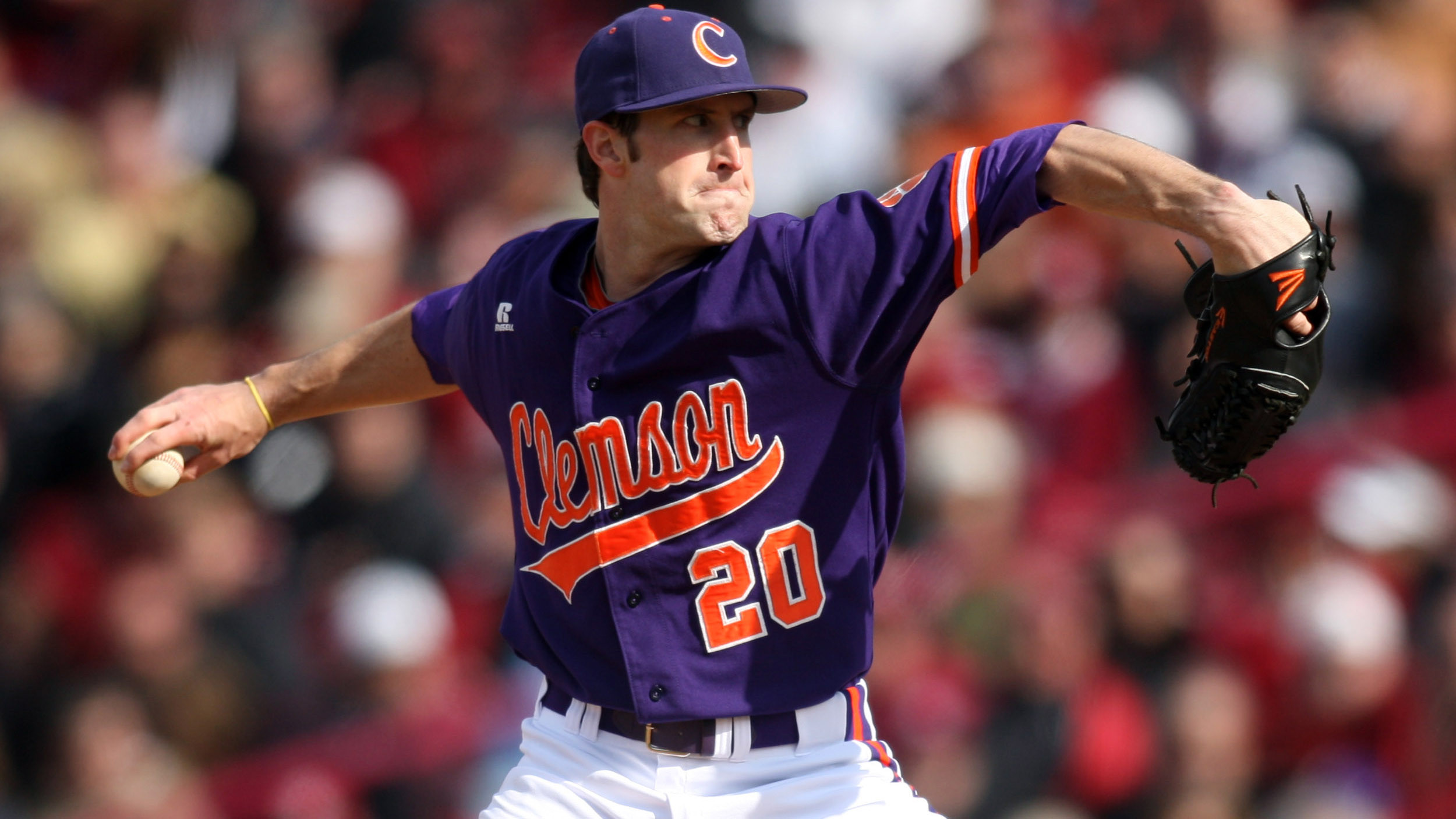 The #15 Clemson Tigers scored two runs in the sixth inning to take the lead and held on for a 3-2 win over Maryland in the first game of a doubleheader at Doug Kingsmore Stadium on Monday afternoon.  The Tigers, who evened the series 1-1, improved to 31-15 overall and 16-10 in the ACC.  The Terrapins fell to 28-22 overall and 9-17 in ACC play.

Freshman lefthander Zack Erwin (4-0) earned the win in his second career start and first career ACC start.  In a career-high-tying 6.0 innings pitched, he allowed five hits, one run, and one walk.  Scott Firth pitched a scoreless ninth inning with three strikeouts to record his fourth save of the year.

Jake Stinnett (5-5), the first of two Terrapin pitchers, suffered the loss despite a strong outing.  In 7.2 innings pitched, he gave up five hits, three runs (two earned), and three walks with two strikeouts.

The Tigers took the game’s first lead in the second inning when Jon McGibbon grounded a two-out single through the left side to score Shane Kennedy, who hit a one-out single to right-center and stole second earlier in the frame.

Charlie White led off the top of the sixth inning with an infield single and Jordan Hagel grounded a single through the left side.  After Kyle Convissar’s sacrifice bunt moved both runners up a base, Kevin Martir popped up a suicide squeeze bunt to the right side.  But McGibbon overran the ball and the ball fell safely behind him on what would have been an inning-ending double play.  White came home on the play to tie the score.

In the bottom of the sixth inning, Thomas Brittle led off with walk.  Two batters later, Steve Wilkerson bounced a double over first-baseman LaMonte Wade, Jr.’s glove to score Brittle.  After Wilkerson advanced to third on an error on a failed pickoff attempt and Steven Duggar walked, Garrett Boulware lofted a sacrifice fly to right field to score Wilkerson and give Clemson a 3-1 lead.

White reached on an infield single with one out in the eighth inning, stole second, and moved to third on Hagel’s single to left field.  White then scored on a balk to cut Clemson’s lead in half.

Wilkerson and McGibbon had two hits and one RBI apiece to lead the Tigers at the plate.

Schmit went 3-for-3 with a hit-by-pitch to lead the Terrapins, who outhit the Tigers 10-5.

Clemson and Maryland will play game-two of the doubleheader and game-three of the three-game series on Monday at 7:00 PM.  The game will be televised by ESPNU.