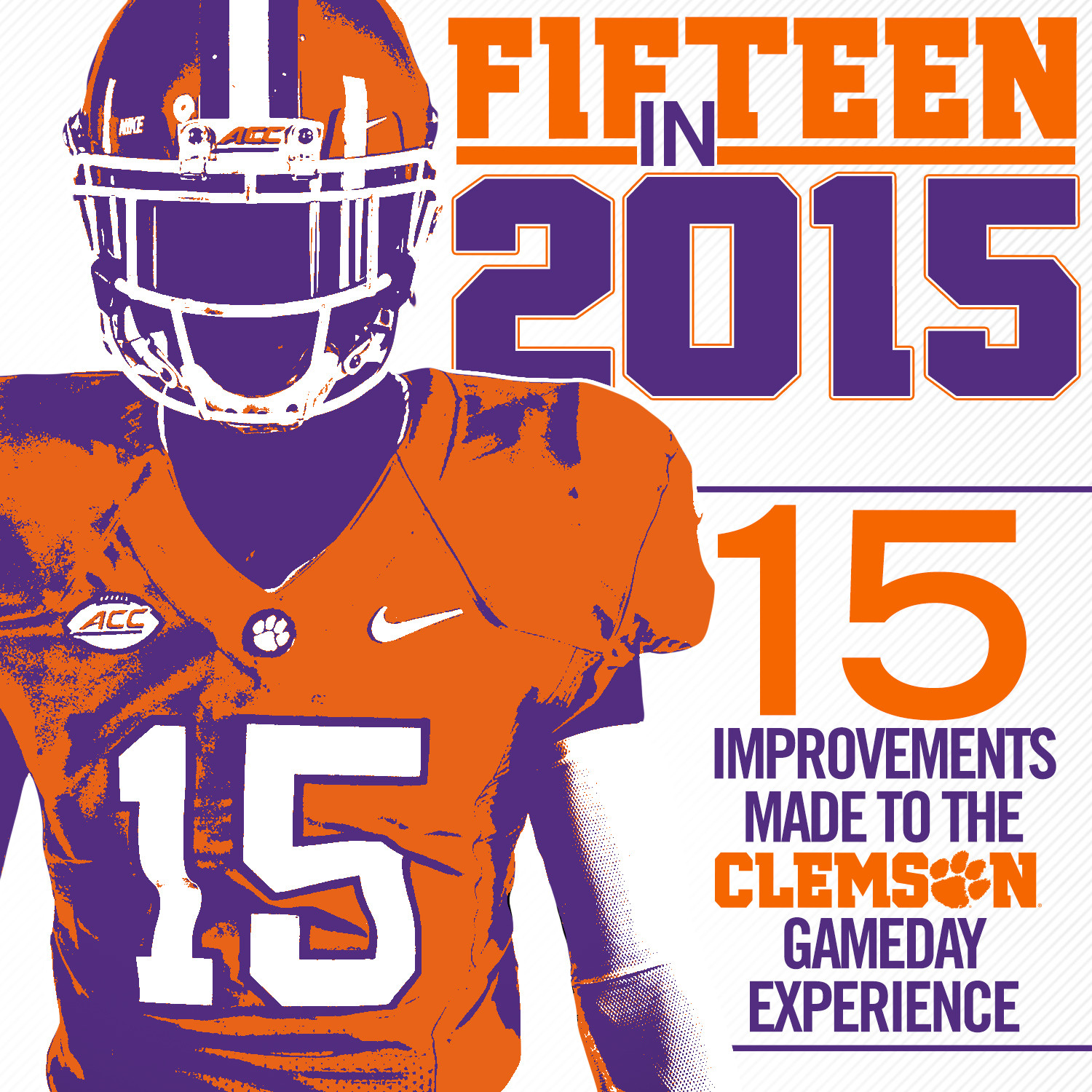 Constantly looking to improve one of the nation’s best gameday experiences, Clemson Athletics today announced 15 new improvements for its fans to expect in Memorial Stadium for the 2015 football season.

“The fans at Clemson football games help create such a tremendous atmosphere for our student-athletes,” Director of Athletics Dan Radakovich said. “We’re always looking for ways to make their experience the best it can be, and these improvements are a few of the things we’re doing to ensure our fans have a great time and keep enjoying Death Valley.”

Several items below were generated from ideas provided by Clemson’s first-of-its-kind Solid Orange Fan Advisory (SOFA) Board at their year-end meeting in May.

1) Completion of the WestZone oculus/bridge project, creating a pedestrian-convenient walkway between the north and south concourses (Expand and Enhance Updates)

2)  Premium seat renovations including complete renovation of the south suites, press and operations areas, and expansion and enclosure of north suites (Expand and Enhance Updates)

5)  A fourth-generation upgrade of the Distributed Antenna System via Verizon, improving cellular service throughout the stadium

6)  Restroom renovations in the north and south upper decks, and improvements throughout the stadium.

9)  All-new videos including “This Is Death Valley” entrance video, fourth-quarter hype video and others

10) An upgraded speaker system with all-new speakers throughout the lower level concourse, and a new orange mesh covering the speaker cabinets atop east end video board

11) New novelty stands in the upper decks, and a new Nike exclusive gameday store in the WestZone

13) The Tiger Tailgate Show, now located behind the Chapman Grandstands at Doug Kingsmore Stadium, will feature head baseball coach Monte Lee as a co-host. The area will also now have concessions, novelties and the Coca-Cola inflatables.

14) The first phase of a new signage and graphics package throughout the stadium, including new banners and wayfinding signage.

15) More restrooms. New portable trailer restrooms located around Littlejohn Coliseum as it undergoes renovations, and a significant increase in restroom locations in tailgating areas throughout the athletic district.