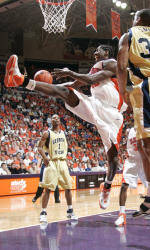 Quick Facts  Clemson has used the same starting lineup in each of its first 16 games.

 Clemson is one win short of tying the school record for the longest winning streak, a 17-0 start to the 1986-87 season. Cliff Ellis, who was the ACC Coach of the Year that season at Clemson, will be on hand for the NC State game to serve as one of three announcers on the Fox SportsNet crew.

 This will be Clemson’s first trip to Raleigh since the 2003-04 season, Oliver Purnell’s first year at Clemson. Each of the last two games have been played at Clemson and NC State won both games, including last year in double overtime.

 This will be a battle of two of the most balanced teams in the ACC as both teams have five double figure scorers.

 Clemson is the only undefeated team left in college basketball. When Oregon defeated #1 ranked UCLA it made the Tigers the last undefeated standing.

 K.C. Rivers has scored in double figures in every game this year even though he has not started. His 16-game streak of consecutive double figure scoring games as a reserve is a Clemson record, breaking the previous record of seven in a row by Dale Davis in 1988-89. He had 20 points to lead the Tigers in scoring against Georgia Tech.

 Clemson has won its first two ACC games for the first time since the 1996-97 season and for just the sixth time in school history.

 Clemson will be looking for its fifth consecutive road victory when the Tigers play at NC State. The last time Clemson won five straight road games was 10 years ago, 1996-97.

 Clemson has lost four consecutive games at the RBC Center by an average of 25 points.

 Clemson posted a perfect 14-0 record against nonconference teams this year, the first time Clemson has had a perfect non-ACC record in the regular season since 1995-96.

 Clemson leads the ACC in offensive rebounds per game with 15.0.

 Clemson and NC State split eight games when Sidney Lowe was a point guard on the Wolfpack team between 1979-83.