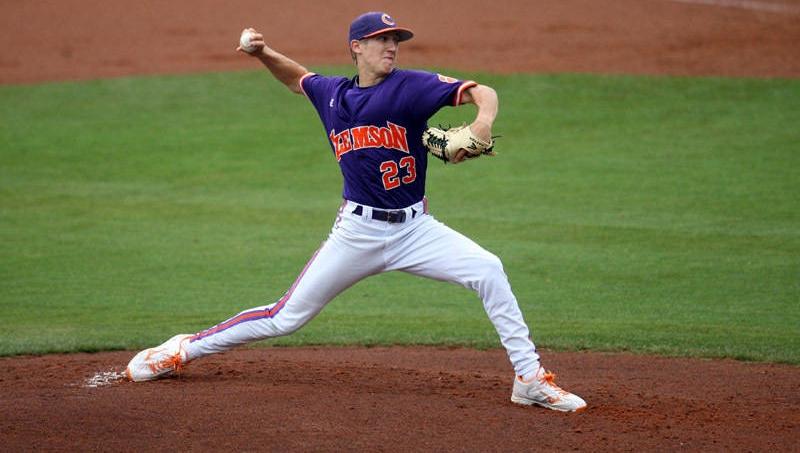 Clemson scored six combined runs in the first four innings, then added two runs in the sixth inning to take an 8-0 lead.  The Seminoles scratched with two runs in the seventh, but they left the bases loaded and could get no closer, as Clemson pulled even with Florida State atop the ACC Atlantic Division standings.

Gossett (9-3) earned the win by tossing 6.0 innings, allowing just three hits, no runs, and three walks with three strikeouts.  Matt Campbell closed out the game with 2.0 hitless and scoreless innings pitched with three strikeouts.  The four Tiger pitchers combined to yield only six hits, all singles, and stranded 10 runners on base.

Seminole starter Peter Miller (6-2) suffered the loss, as he surrendered three hits, two runs, and two walks with one strikeout in 1.1 innings pitched.

Steve Wilkerson gave Clemson a 1-0 lead when he hit a home run to right-center, his second long ball of the season.  It was also the first home run allowed by Miller in 2013.

In the second inning, Jon McGibbon reached on an infield single with one out and Thomas Brittle was hit-by-pitch.  Tyler Slaton ripped a double to right field to score McGibbon.

Garrett Boulware led off the third inning with a walk and Shane Kennedy lined a 1-2 pitch down the left-field line for a single to advance Boulware to third and up his hitting streak to 11 games.  Tyler Krieger‘s groundout to short plated Boulware.  Two batters later with two outs, Thomas Brittle hit a line drive to left-center.  Centerfielder Seth Miller missed the ball on a diving attempt and the ball rolled near the warning track.  The speedy Brittle rounded the bases for an inside-the-park, two-run homer, his second long ball of the season, to give Clemson a 5-0 lead.

In the top of the fourth inning, Steven Duggar lined a two-out single to left-center and Boulware was hit-by-pitch.  Kennedy followed with a single through the left side to score Duggar.

Marcus Davis led off the bottom of the fourth inning with a single off the wall in right field and Stephen McGee walked on four pitches.  Two batters later, Jameis Winston drew a one-out walk to load the bases, but Casey Smit grounded a 3-1 pitch into a 4-6-3 double play to end the inning.

In the sixth inning, Wilkerson lined a one-out single to left field and Duggar lined a single to right field.  After Boulware loaded the bases with a walk, Kennedy reached on a fielder’s choice as Boulware was retired at second and Wilkerson scored.  Duggar then scored on a passed ball to give Clemson an 8-0 lead.

John Sansone drew on a one-out walk in the seventh inning and Giovanny Alfonzo reached on an infield single to short.  Seth Miller reached on another infield single to short to load the bases, then DJ Stewart hit a single through the left side to score Sansone and Alfonzo.  Two batters later, McGee drew a two-out walk to load the bases, but Jose Brizuela flied out to left field to keep the Tigers ahead 8-2.

Wilkerson, Duggar, Kennedy, and McGibbon had two hits apiece for the Tigers, who outhit the Seminoles 11-6.  Clemson also hit two home runs for the second time in 2013 and stole four bases.

Clemson and Florida State will play game-two of the three-game series on Friday at 8:00 PM on ESPNU.