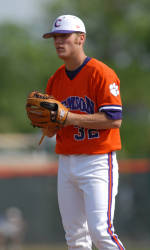 For the ninth game in a row, the Tigers took the game’s first lead. Epps led off the game with a single to left field. Freeman and Jeff Schaus followed with walks to load the bases, then Ben Paulsen singled through the right side to score Epps. Kyle Parker was hit-by-pitch to bring home Freeman and Wilson Boyd walked to score Schaus. Two batters later, Miller walked to score Paulsen. After Jason Stolz flied out for out #2, Epps slapped his second hit of the inning when he lined a single to left-center to score Parker and Boyd, giving the Tigers a 6-0 lead after 11 Tigers batted in the opening frame.

In the second inning, the Wolfpack appeared to get right back in the game. Pratt Maynard led off with a line-drive single to center and went to second on Pat Ferguson’s single to right-center. After the two runners moved up a base on a wild pitch, the next two batters struck out. Russell Wilson then hit a grounder that appeared to be headed into right field, but Freeman made a nice play at second and threw off-balance to first for the inning-ending out.

The Tigers extended their lead in the third inning. Miller hit a one-out infield single and stole second. After Epps walked, Freeman lined a two-out single to right field to score Miller.

Clemson kept the pressure on in the top of the fifth inning. Stolz led off with a single through the left side and went to third on Epps’ single to right field. Freeman followed with a single to left-center to score Stolz and Schaus walked to load the bases. But the Tigers were unable to add to their lead, as the next three batters were retired.

N.C. State rallied again in the bottom of the fifth inning. Pinch-hitter John Gianis blooped a one-out single to center, advanced to second on Wilson’s walk, and moved to third when Dallas Poulk fisted a single to center. Kyle Wilson then grounded out to first as Gianis scored the Wolfpack’s first run of the game. Russell Wilson later scored on a wild pitch with two outs.

Miller upped the Tigers’ lead to seven runs when he hit a solo home run to right-center, his third long ball of the season, in the sixth inning.

In the top of the seventh inning, Freeman led off with a double down the left-field line. Both Schaus and Paulsen followed with walks to load the bases, then pinch-hitter Addison Johnson reached on a fielder’s choice as Paulsen was retired at second and Freeman scored. Boyd’s single through the right side plated Schaus, then Johnson scored on a wild pitch. Two batters later, Miller lined a two-out single to right field to score Boyd, giving Clemson a 13-2 lead.

In the bottom of the seventh inning, Russell Wilson walked with one out. Two batters laters, Kyle Wilson ripped a two-out triple down the right-field line to score Russell Wilson.

N.C. State added five runs to its run total in the ninth inning. Gianis led off with a single to left-center and Russell Wilson followed with a line-drive single to left field. Two batters later, Kyle Wilson loaded the bases with an infield single, then Devon Cartwright laced a single up the middle to score Gianis and Russell Wilson. Cameron Conner followed with a double to left to score Kyle Wilson. Two batters later, Harold Riggins bounced a two-out single through the left side to score Cartwright, then Andrew Ciencin reached on a fielding error by Freeman at second that allowed Conner to score, cutting Clemson’s lead to 13-8. But Gianis grounded out to second to end the game.

Kyle Wilson went 2-for-4 with a triple and two RBIs for the Wolfpack, who totaled 12 hits in the game. Gianis came off the bench and went 2-for-4 with two runs, while Russell Wilson tallied a game-high three runs.

Clemson and N.C. State will play game-two of the three-game series at Doak Field on Friday at 6:30 PM.