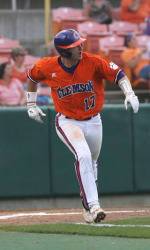 John Nester and Doug Kingsmore Stadium on Tuesday night. The Tigers, who ended their regular-season home slate with a 27-8 record, improved to 36-17 overall, while the Cougars fell to 35-17.

Tiger starter Scott Weismann (2-0) earned the win. The freshman righthander pitched a career-long 5.0 innings, allowing only three hits and no runs. Tomas Cruz pitched 2.1 hitless and scoreless innings in relief to set up Matt Vaughn. The Summerville, SC native pitched a scoreless ninth inning to record his fourth save of the season.

Four Tiger hurlers limited College of Charleston to only six hits, two unearned runs, 0-for-11 with runners in scoring position, and 0-for-10 with two outs. The Cougars entered the game with a team batting average of .358, fifth-best in the nation entering this week.

For the eighth game in a row, the Tigers took the game’s first lead when Jeff Schaus hit an opposite-field, solo homer to left field in the first inning. It was his 11th long ball of the season.

Clemson doubled its lead in the third inning. John Nester led off with a double to left-center and went to third on the play on centerfielder Cole Rakar’s fielding error. Jason Stolz followed with a groundout to second to score Nester.

In the fourth inning, Schaus led off with a walk and Ben Paulsen followed with a deep drive down the left-field line, but Clay McCord leaped over the fence and robbed Paulsen of a two-run homer.

Nester led off the fifth inning with a home run to left-center, his fifth long ball of the season.

For the sixth inning in a row, the Cougars put their leadoff batter on base when McCord led off the sixth with a walk. After Joey Bergman followed with a single to left and the next two Cougars were retired, Ryan Daniels walked to load the bases. Matt Mansilla then hit a hard groundball right at shortstop Brad Miller, who booted the ball, allowing McCord and Bergman to score. Mike Hentz drew another walk to load the bases, but Cruz struck out Rakar to keep the Tigers ahead 3-2.

In the seventh inning, Nester led off with a single through the right side on a 1-2 pitch. After Stolz unsuccessfully laid down a bunt, he singled to right field on another 1-2 pitch. Chris Epps also tried to move the runners over with a bunt, but he eventually walked on a 3-2 pitch to load the bases with no outs. Mike Freeman then hit a sacrifice fly to right to score Nester as Stolz advanced to third. Schaus followed with another sacrifice fly to right to plate Stolz, giving Clemson a 5-2 lead.

In the ninth inning, the Tigers called on Vaughn before College of Charleston mounted a rally. Hentz lined a one-out single to left and went to third on Rakar’s double over the third-base bag. After Austin Morgan struck out for out #2, Vaughn induced a groundout by McCord to end the game.

Nester went 3-for-4 with a double, homer, and three runs to lead Clemson’s seven-hit attack. Stolz also went 2-for-3 with a run and RBI. Freeman’s 10-game hitting came to an end after going 0-for-3 with an RBI. Hentz paced the Cougars by going 2-for-2 with a walk.

Clemson will travel to Raleigh to take on N.C. State in a three-game series beginning Thursday at 6:30 PM.