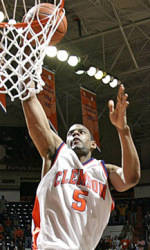 CLEMSON, SC – With the news that Trevor Booker’s NBA rookie season came to a premature end due to a foot injury, ClemsonTigers.com has taken the time to provide an in-depth look at what the other former Tiger basketball standouts are doing in the professional ranks.

Click the PDF link above to read more about the scoring and rebounding averages of all 14 players, where they rank among their league’s statistical leaders, and when their regular seasons come to an end for the 2010-11 year.

Below is a closer look at some of the numbers from Clemson’s 14 former players who are competing professionally, both domestically and overseas.

54.9 – Field goal percentage for Trevor Booker’s (2006-10) this season with the Wizards, second-best among all NBA rookies

69 – Terrell McIntyre (1995-99) scored the 69th and final point of Unicaja Malaga’s dramatic 69-68 win over Real Madrid on March 19 in Spain with a buzzer-beating, double-pump three-point shot