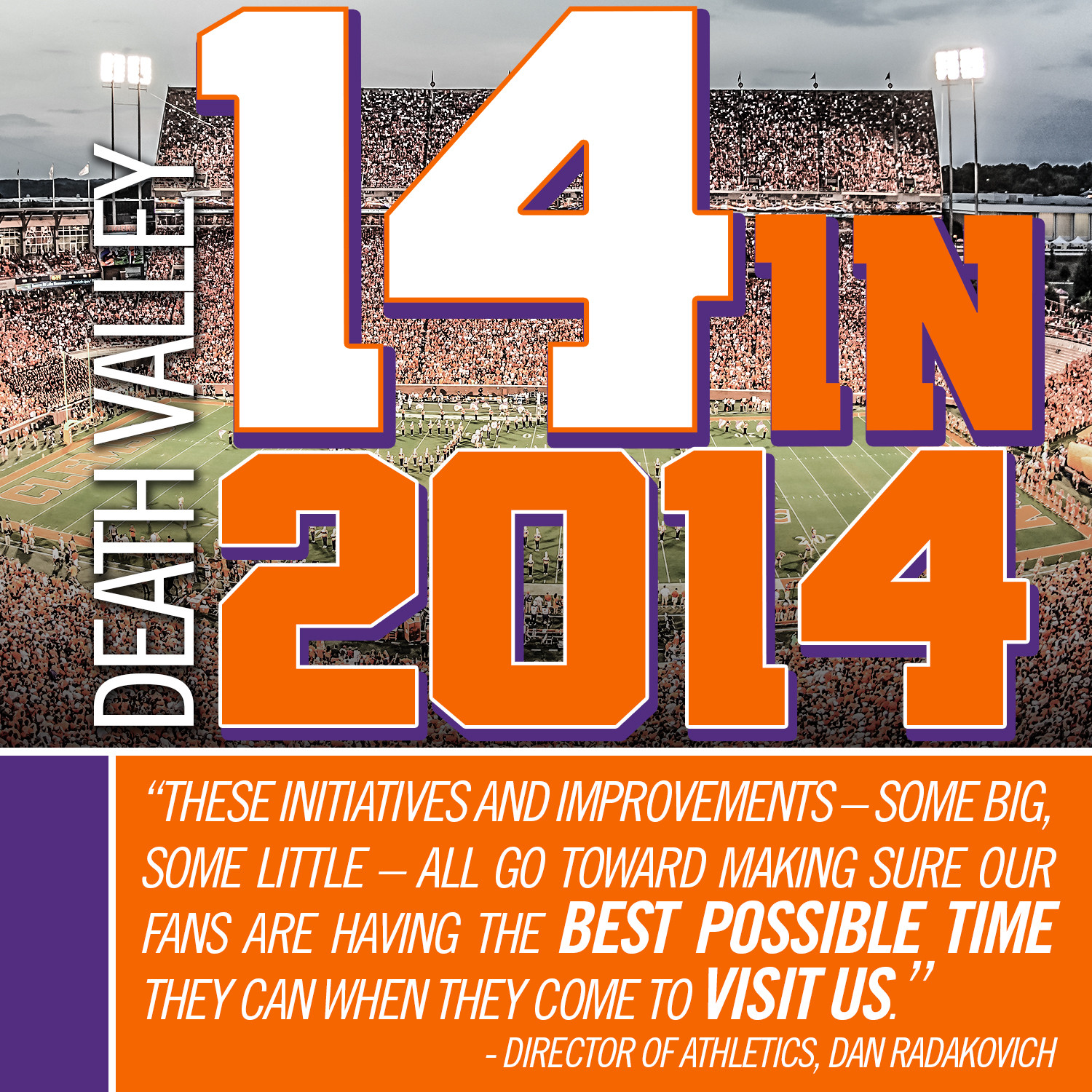 14 for 2014 – The Clemson Experience at Memorial Stadium

From cell phone coverage to video board graphics, fans attending Clemson’s 2014 home opener against S.C. State Saturday will notice a myriad of improvements put into place since the conclusion of the 2013 season in the efforts to continually enhance the fan experience at Memorial Stadium.

“The gameday experience at Clemson and in Death Valley is second to none, but we’re always looking for ways to improve” director of athletics Dan Radakovich said. “These initiatives and improvements – some big, some little – all go toward making sure our fans are having the best possible time they can when they come to visit us.”

The list of improvements and upgrades include: Verizon’s $10 million expansion of the distributed antenna system both inside stadium and in tailgate areas; credit card acceptability and new televisions at every permanent concession stand; closed captioning of the public address system; a new graphics package on video boards throughout the stadium; continual out-of-town scoreboard; seating upgrades available through the Experience App; menu additions at concessions both in and outside of stadium; new uniforms for the Tiger Band; the creation of a Fan Advisory Board to help identify areas important to the fan experience; interactive tailgate restroom locater available via ClemsonTigers.com; expanded and redesigned entrances at Gate 1; operable windows in several suites; cleaning and repainting of the stadium; and a new social media command center.

14 IMPROVEMENTS AT MEMORIAL STADIUM FOR 2014

1.)      Expansion of the distributed antenna system

Verizon and campus partners CCIT completed the second phase of a $10 million upgrade to the distributed antenna system in Memorial Stadium with expanded antennas in drums along the top of the upper deck along with field level and other new access points. The project also enhanced coverage capabilities in tailgate areas around the athletic district.

In a dedicated area of the ribbon boards near midfield on both the north and south stands, public address and referee announcements will be closed captioned throughout the game.

Working with on-campus partners at Clemson University Broadcasting, the athletic department developed a consistently-branded, updated graphics package for use on all video boards.

A portion of the ribbon boards along both north and south upper decks will show up to the minute out-of-town scores of games around the ACC and throughout the nation.

Fans can upgrade their seating location to areas lower in the stadium via clemson.expapp.com. A limited number of seats will be available for upgrade prior to kickoff.

Barbeque from The Smoking Pig and freshly grilled burgers and hotdogs are a few of the expanded menu items available from Aramark concessioners throughout the stadium.

Continuing a partnership dating back several decades, IPTAY provided funds for the purchase of more than 350 multi-use uniforms to the Clemson University Tiger Band this summer. The highly-versatile uniforms feature three distinct looks: 1) a cadet front based on Clemson’s 1893 student uniform; 2) a cadet front based on Clemson 1905 student uniform and 3) a contemporary tiger stripes front.

Seeking input and feedback from season ticket holders to continue providing the best gameday atmosphere in the nation, Clemson Athletics is developing an advisory group consisting of fans called the Solid Orange Fan Advisory (SOFA) Board. The SOFA Board allows fans to contribute ideas and provide feedback on numerous topics relating to the fan experience while representing the interests of all Clemson season ticket holders. The athletic department received more than 430 applicants for the board in the first week following its announcement.

Access to the southeast corner of the stadium was improved with an entirely new set of gates, upgrading aesthetics and providing both more access points and a larger queuing area off of Williamson Road.

A section of suites on the north side of the stadium had operable windows installed during the offseason, with a complete renovation of north and south suites and premium areas scheduled to begin following the 2014 season.

Memorial Stadium underwent a complete pressure wash of all external, seating and concourse areas during the offseason. The famous “Clemson Tigers” lettering in the upper deck was repainted and new signage was installed throughout the stadium.

Clemson athletic communications has repurposed an area of the Bob Bradley Pressbox to serve as a hub for the department’s digital media team. With dedicated high-speed internet access and multiple view game monitors, the group will provide updates and respond to fans via social media channels and through ClemsonTigers.com. A directory of official accounts is available HERE.