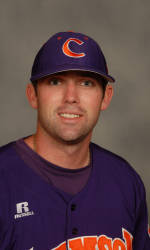 The Clemson Tigers, who had to win twice Sunday just to stay in the tournament, look like the fresher team for Monday’s championship game of the Clemson Regional.

The two teams, which each have one loss in the double-elimination tournament, will play for a spot in Super Regionals Monday night.

“We’ve got some fresh arms ready to go,” Clemson coach Jack Leggett said after the victory over the Cowboys. “It’s tough to find two freshmen to pitch like that in a pressure situation in the regionals.”

While Dwyer mowed down the Cowboys (34-23), the Tigers (43-20) forced OSU coach Frank Anderson to use six pitchers, including four in the first three innings.

“I basically just worked off my fastball,” said Dwyer (5-5), who hadn’t won a game since April 11. ” just tried to throw strikes and keep them off-balance.”

Neither coach named a starter for the deciding game, but the Tigers would seem to have more options left.

Clemson scored four runs in the first inning, one in the second and six in the third to take an 11-0 lead. The way Dwyer was throwing, the last six innings seemed like a formality.

“It was tough to play from behind out there like that,” Anderson said. “After the fourth or fifth inning, it was kind of like a Little League deal trying to get everybody into the game.”

Mike Freeman and Wilson Boyd each had four hits for the Tigers, who got homers from Freeman and Ben Paulsen.

Tyrone Hambly homered for the Cowboys.

Facing elimination at the start of the day, the Tigers won their two games by a combined 25-1 with 30 hits.

“We just kind of put together a perfect day,” Leggett said.