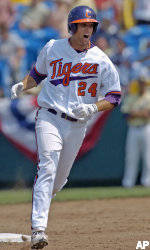 Sophomore lefthander Ryan Hinson pitched #14 Clemson to a 5-4 victory over Wake Forest on Sunday afternoon in front of 595 fans at Hooks Stadium. The Tigers led 5-2 entering the ninth inning, but the Demon Deacons plated two runs and had the tying run on second base with one out before the game was called due to heavy rain. The Tigers, who won the series 2-1, improved to 25-10 overall and 10-5 in ACC play, while Wake Forest dropped to 21-18 overall, 8-10 in the ACC.

Hinson (3-1) allowed two runs on nine hits in a career-long 7.0 innings pitched. The Tiger starter also struck out a career-high eight and did not walk a batter. Wake Forest Starter Charlie Mellies (1-1) suffered the loss, as he allowed three runs on five hits in 3.0 innings pitched.

The Demon Deacons jumped out to a 2-0 lead in the first inning. Brett Linnenkohl led off with an infield single and went to third on Andy Goff’s double to left. Leftfielder Addison Johnson slipped on the wet grass, allowing Goff to turn a single into a double. Two batters later, Michael Murray singled up the middle to score both Linnenkohl and Goff.

In the top of the second inning, the Tigers responded with three runs to take a 3-2 lead. Ben Paulsen led off with a single through the right side and Wilson Boyd followed with a walk on four pitches. Two batters later, Marquez Smith lined a double to left field to score Paulsen. Andy D’Alessio laced Mellies’ next pitch to left-center for a double to score Boyd and Smith. Smith and D’Alessio, the #3 and #4 batters in the order in the first two games of the series, were moved down to the #7 and #8 spots, respectively, in the batting order after combining to go 0-for-16 on Friday and Saturday.

Clemson added two runs to its lead in the fourth inning thanks again to the combination of Smith and D’Alessio. Smith led off with a walk after being down 1-2 in the count. D’Alessio then lined a double, his second of the game, to center to score Smith. David Bunnell followed with a single up the middle to plate D’Alessio, and Bunnell advanced to second when centerfielder Ben Terry misplayed the ball. Bunnell moved to third on D.J. Mitchell’s sacrifice bunt. Head Coach Jack Leggett called for Johnson to suicide-squeeze bunt with two strikes. His bunt was popped up into the air, and relief pitcher Ben Hunter made a shoe-string catch. Hunter turned and threw to third base to double-up Bunnell.

Play was halted at the end of the fourth inning due to lightning in the area. After a 69-minute delay, play resumed with the Tigers ahead 5-2.

Clemson had another opportunity to add to its lead in the sixth inning, but came up empty. Hogan led off by reaching on an error by Goff. Two batters later, D’Alessio hit a one-out single to right-center, advancing Hogan to third. But Bunnell grounded into a 4-6-3 double play.

In the bottom of the eighth inning, Goff led off with a single up the middle. Allan Dykstra followed with a line-drive single to right field. In came Alex Martin in relief of Hinson. Martin got Murray to fly out to left field for out #1. After P.J. Zocchi entered the game on the mound, Dustin Hood hit the first pitch he saw to Bunnell at second. Bunnell started the 4-6-3 double play to help get the Tigers out of a jam.

In the bottom of the ninth inning, Terry was hit by the first pitch of the inning. Evan Ocheltree followed with a double to right field, as Terry advanced to third. In came Chris Fidrych, and Tyler Smith flied out to center, as Terry scored on the sacrifice fly. Leggett then called on Stephen Clyne, and pinch-hitter Eric Williams singled up the middle off his glove to score Ocheltree. Williams moved to second on a wild pitch, the first of the fifth-year senior’s career, as heavy rain began to fall. Play was halted again with one out and a 2-2 count on Linnenkohl, Williams on second base, and the Tigers ahead 5-4.

After the two teams waited for the rain to stop for 90 minutes, the umpires decided to call the game, as there was standing water in the outfield.

Clemson pitchers combined to strike out 30 batters against only four walks in the series. The Tigers did not commit an error in the series as well.

Clemson will travel to Columbia, SC to take on South Carolina on Wednesday at 7:00 PM.