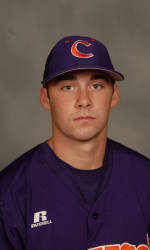 Like the night before, when Clemson’s first six batters of the game touched home plate, the Tigers nearly equaled that feat on Friday when the first five Tigers that stepped to the plate came around to score. Clemson scored five more runs in the third inning to build a 10-1 lead and the Tiger bullpen combined to pitch 4.0 scoreless innings to seal the victory.

Tiger starter Casey Harman (7-3) earned the win. In 5.0 innings pitched, he allowed eight hits, five runs, and no walks with eight strikeouts. Justin Sarratt pitched 2.0 scoreless innings in relief, while Matt Vaughn each pitched a scoreless inning to close out the game. The four Clemson hurlers combined for 12 strikeouts against no walks.

Wolfpack starter John Lambert (1-5) suffered the loss, as he gave up 10 hits, 10 runs (nine earned), and two walks with one strikeout in 2.1 innings pitched. N.C. State received a solid outing from lefty reliever Grant Sasser, who allowed just one run on four hits in 6.0 innings pitched.

For the 10th game in a row, the Tigers took the lead first. Chris Epps led off the game with a walk and stole second. Mike Freeman then hit an 0-2 breaking ball up the middle for a single to score Epps. Jeff Schaus ripped a 3-2 breaking ball through the right side for a single to move Freeman to third. Schaus then stole second and Freeman scored on the play when the throw went into centerfield. After Ben Paulsen walked, Kyle Parker hit a grounder to third. Andrew Ciencin’s throw to second pulled Russell Wilson off the bag, allowing Paulsen to be safe at second as Schaus scored on the throw to second. Wilson Boyd followed with a double to right-center to score Paulsen, then John Nester singled through the left side to plate Parker as Boyd held at third with no outs. But the Tigers were unable to plate any more runs, as they held a 5-0 lead in the middle of the first inning.

The Wolfpack dented the scoreboard when Harold Riggins led off the second inning with an opposite-field home run to right-center, his second long ball of the season.

The Tigers responded with five runs in the third inning. Parker led off with a sharp single through the left side and went to second on Boyd’s single up the middle. Two batters later, Brad Miller singled through the left side to score Parker, then Jason Stolz bounced another single through the left side to plate Boyd. Miller and Stolz were successful on a double steal, then Miller scored on the play when the throw went into left field. After Epps’ single to center, Freeman’s groundout to third plated Stolz. Schaus then reached on a throwing error by Riggins at first that allowed Epps to score all the way from second base, giving Clemson a 10-1 lead.

In the fourth inning, Riggins hit a one-out, infield single. Two batters later, Ciencin laced a two-out double down the left-field line to score Riggins and advanced to third on the throw. Cameron Conner then hit an infield single to bring home Ciencin, cutting Clemson’s lead to 10-3.

The Wolfpack kept the pressure on in the fifth inning. Devon Cartwright led off with a double down the left-field line. Two batters later, Drew Poulk hit an opposite-field, two-run homer to right field. It was his eighth long ball of the season.

N.C. State looked like it would cut further into Clemson’s five-run lead in the sixth inning. Ciencin and pinch-hitter John Gianis led off with singles. Chris Schaeffer then hit a liner, but it was right at Miller at short for out #1. After Sarratt struck out pinch-hitter Kyle Wilson for out #2, Cartwright hit what looked like a double down the right-field line. But Parker made a diving catch to save at least one run and keep Clemson ahead 10-5.

In the eighth inning, Stolz led off with an infield single and went to second on Epps’ walk. Freeman moved the runners up a base with a sacrifice bunt, then Epps was caught stealing at third after a suicide squeeze bunt attempt went awry. But Addison Johnson came through with a two-out single through the left side to score Stolz.

The Tigers, who totaled 14 hits, were led at the plate by Stolz, who went 3-for-3 with an RBI, two runs, a hit-by-pitch, and two steals. Schaus, Boyd, and Nester added two hits apiece. Six different Tigers combined to steal seven bases, the most by Clemson since the 2009 season-opener against Charlotte when it stole nine bases.

Ciencin led the Wolfpack’s 12-hit attack by going 3-for-4 with a double and RBI. Poulk went 2-for-4 with a homer and two RBIs as well.

Clemson and N.C. State will play the series-finale of the three-game series at Doak Field on Saturday at 1:00 PM. The game will be televised live by Regional Sports Network.