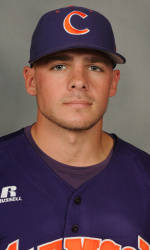 Creede Simpson’s three-run homer with two outs in the ninth inning gave #14 Auburn a two-run lead and the SEC Tigers held on to edge #16 Clemson 11-10 in front of 3,326 fans at Plainsman Park in the Auburn Regional on Sunday. Auburn, who improved to 3-1 in the regional and staved off elimination with the come-from-behind win, upped its record to 43-20 on the season. Clemson, who dropped to 2-1 in the regional, fell to 40-22 in 2010.

With Clemson trailing 5-1, it scored seven runs in the fifth inning to take an 8-5 lead. Auburn scored one run in the sixth and two in the top of the seventh to tie the score, but Clemson scored a run in the bottom of the seventh to take a 9-8 lead. After a scoreless eighth inning and the first two Auburn batters were retired in the top of the ninth, Justin Bryant walked and Justin Fradejas reached on a bloop single off the glove of second-baseman Mike Freeman. Simpson, who was making his first plate appearance of the game, belted a 1-2 pitch over the fence in left-center for a dramatic three-run homer to give Auburn an 11-9 lead.

But Clemson refused to go down quietly. Singles by Wilson Boyd along with a sacrifice bunt put the two at second and third with one out. Shaffer scored and Boyd moved to third on a wild pitch with one out, but two of the next three Clemson batters were retired without Boyd touching home plate as Auburn ended Clemson’s 60-game winning streak (dating to 2009) when leading entering the ninth inning.

Auburn grabbed the game’s first lead with two runs in the top of the first inning. Trent Mummey led off with a hit-by-pitch and advanced to second on Dan Gamache’s sacrifice bunt. Brian Fletcher laced a double down the left-field line to score Mummey, then Hunter Morris singled up the middle to plate Fletcher.

In the bottom of the first inning, Freeman grounded a one-out single up the middle to extend his hitting streak to 10 games. But Clemson was unable to score a run in the frame.

In the third inning, an Auburn error aided Clemson in denting the scoreboard. Freeman reached with two outs on a throwing error by Bryant at second and Jeff Schaus walked on four pitches. Kyle Parker then lofted a routine flyball to left field, but Fletcher lost the ball in the sun and the ball fell for a double to bring home Freeman. But Clemson stranded runners at second and third when Brad Miller flied out to right field, keeping Auburn ahead 2-1.

Mummey led off the top of the fifth inning with a double to left-center and moved to third on Gamache’s groundout. Fletcher then belted a two-run homer to center, his 22nd long ball of the season. Morris followed with a single through the right side. Two batters later, pinch-hitter Kevin Patterson laced a two-out double to left-center to score Morris, upping Auburn’s lead to 5-1.

In the bottom of the fifth inning, Clemson put its first leadoff batter of an inning on base and used seven hits and two costly fielding miscues to score seven runs and take an 8-5 lead. Addison Johnson led off with a line-drive single to left field on an 0-2 pitch and went to third on Freeman’s single to right field. Schaus then singled through the right side to plate Johnson and Parker hit a potential double-play grounder. After Schaus was retired at second, Bryant was unable to get the ball out of his glove, allowing Parker to reach. Miller then ripped a double to right-center to score Freeman and Parker. The two-bagger extended Miller’s hitting streak to 13 games. After Auburn called on Hubbard out of the bullpen, John Hinson hit his first pitch over the fence down the right-field line for a two-run homer, his 14th long ball of the year. It was also just the second home run allowed by Hubbard in 2010, as he entered the game with 43.1 innings pitched on the season. Shaffer reached on a fielding error. Two batters later, Spencer Kieboom lined a two-out double to left-center to score Shaffer. Johnson then slapped his second hit of the inning, this time through the right side, to score Kieboom. After Freeman was hit-by-pitch, Schaus lofted a line drive to deep right field, but Fradejas made the inning-ending catch with his back against the wall.

Fradejas hit a towering solo home run down the left-field line in the sixth inning, his third home run of the year, to narrow Clemson’s lead to 8-6.

In the top of the seventh inning, Morris lined a one-out single to right field and went to third two batters later on Patterson’s two-out double over the first-base bag. After Casey McElroy was hit-by-pitch to load the bases, Bryant walked on five pitches to score Morris. Fradejas chopped a 1-2 pitch over the mound and reached on an infield single to score Patterson and tie the score. Mummey then hit a ball off the end of his bat down the third-base line, but Hinson made the barehanded pickup and threw to first to retire Mummey in a close play to end the inning.

Clemson came right back and regained the lead in the bottom of the seventh inning. Boyd led off with a walk and advanced to second on Kieboom’s sacrifice bunt. Two batters later, Freeman lined a two-out double down the right-field line to score Boyd, giving Clemson a 9-8 lead.

In the top of the ninth inning, Patterson popped up in the infield for out #1 and McElroy lined out to center for out #2. Bryant walked on four pitches, then Fradejas hit a blooper to shallow center on an 0-2 pitch. Freeman got a good part of his glove on the ball but could not come up with the catch as Fradejas reached on the single. Down to Auburn’s last strike for the second batter in a row, Simpson, who earlier entered the game as a defensive replacement, belted a 1-2 pitch up in the zone over the fence in left-center for a three-run homer, his fifth long ball of the season.

Shaffer led off the bottom of the ninth inning with a single through the left side and advanced to second on Boyd’s single to left-center. Kieboom’s sacrifice bunt advanced both runners up a base, then on a 1-2 pitch to Johnson, the ball got away from the catcher. Shaffer raced towards home and scored on the wild pitch on a close play at the plate as Boyd moved to third. With the infield in, Johnson grounded out to first for out #2 as Boyd held at third, then Freeman walked on five pitches. But Schaus popped up in the infield on his first pitch to end the game.

Fletcher, Morris, and Fradejas all had three hits apiece to pace Auburn, who outhit Clemson 17-15. Fletcher went 3-for-5 with a homer, three RBIs, and two runs to highlight Auburn’s offensive output.

Every Clemson batter had at least one hit. Freeman went 3-for-4 with two runs and a walk, while Hinson went 3-for-5 with a homer and two RBIs.

Auburn and Clemson will match up again on Monday at 7:00 PM EDT to determine the Auburn Regional Champion. Clemson will be the designated visiting team and occupy the first-base dugout.