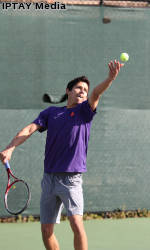 Auburn is ranked 14th nationally according to the latest ITA poll. Clemson is ranked 66th and falls to 3-6 this season.

Auburn went on to claim four singles matches to take the victory.

Clemson will open ACC play next Sunday as the Tigers play at Georgia Tech in Atlanta, GA. Match time is set for 12:00 noon.