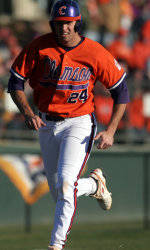 Andy D’Alessio totaled two doubles, a homer, and four RBIs, and he was one of four Tigers who had three hits apiece in #13 Clemson’s 11-8 victory over #10 Coastal Carolina in the winners’ bracket of the Myrtle Beach Regional in front of 6,231 fans at Coastal Federal Field on Sunday. The crowd was the largest ever at the home of the Braves’ minor-league team. Clemson, the #2 seed, improved to 40-21 overall, while the #1-seed Chanticleers fell to 49-12.

Tiger reliever Ryan Hinson (6-2) earned the win after entering the game and getting out of a bases-loaded, one-out jam without allowing a run in the sixth inning. He pitched 1.2 innings in all, allowing one hit and no runs with a strikeout.

D’Alessio hit a home run and two doubles off the wall in right-center. The Tiger senior scored three runs and totaled four RBIs as well. Wilson Boyd, Taylor Harbin, and Doug Hogan also had three hits apiece, as Clemson had 16 in the game.

Derek Martin and Dock Doyle totaled three hits apiece for the Chanticleers, who had 14 hits in the game.

David Sappelt led off the game with a single to left field and went to second on a wild pitch. Dom Duggan followed with a single to right field, as Sappelt stopped at third base. Chris Raber then singled through the left side to plate Sappelt, giving the Chanticleers a 1-0 lead.

The Tigers responded with four runs in the bottom of the first inning. Leadoff batter Brad Chalk reached on a fielding error by second-baseman Adam Vrable and Boyd followed with an infield single to third base. After Marquez Smith’s sacrifice bunt moved the runners up a base, D’Alessio lined a double off the wall in right-center to score Chalk and Boyd. Harbin reached on another infield single to third base, then Hogan plated D’Alessio with a single through the left side. The hit extended Hogan’s hitting streak to 12 games. Two batters later, Addison Johnson dumped a double to right field to score Harbin.

The Chanticleers came right back and tied the score with three runs in the top of the second inning. Martin led off with a single to right-center and Doyle followed with a single to left-center. Chalk booted Doyle’s single, allowing both runners to move up a base. Tyler Bortnick hit a chopper back to David Kopp, who tossed the ball to Hogan to retire Martin at home for out #1. Vrable then doubled over Smith’s head at third base to score Doyle. Sappelt’s sacrifice fly to left scored Bortnick. Duggan followed with a groundball to Smith at third, but the senior could not come up with the ball, allowing Vrable to score from second on the error.

Clemson retook the lead in the bottom of the second inning. Boyd hit a one-out single through the left side. Two batters later with two outs, D’Alessio hit a 1-2 pitch over the wall in centerfield for a two-run homer, his 15th of the season and 57th of his career.

Coastal Carolina cut Clemson’s lead in half in the third inning. Tommy Baldridge reached on a throwing error by Smith. Three batters later with two outs, Baldridge scored on a wild pitch.

Doyle tied the score in the sixth inning when he led off with a solo homer to center, his second of the season. The Chanticleers later loaded the bases with one out, but Hinson retired the two batters he faced in the inning to keep the score tied 6-6.

Clemson regained the lead in the seventh inning. Smith led off with walk and D’Alessio followed with a double off the wall in right-center, his second of the game. The throw to Vrable was muffed, allowing Smith to score on the error.

The Tigers tacked on four insurance runs with two outs in the eighth inning. J.D. Burgess reached with one out on an infield single. Two batters later, Boyd lined a double to right-center, as Chalk stopped at third. Then on an 0-2 pitch, Smith belted a two-out, three-run homer to left field, his 12th of the season. D’Alessio followed with a hit-by-pitch and went to third on Harbin’s bloop single to right-center. Hogan then singled to left to score D’Alessio.

In the ninth inning, Coastal Carolina mounted a rally. Baldridge led off with a double off the wall in center and Matt Rademacher hit a two-run homer down the left-field line, his seventh of the year. Martin’s single to right field brought the potential tying run to the on-deck circle, but Alan Farina got Doyle to ground into a 4-6-3 double play and Bortnick to pop up to end the game.

The Tigers will play Coastal Carolina on Monday at 3:00 PM. The Chanticleers must defeat the Tigers twice on Monday to advance to super-regional play. If the second game on Monday is needed, it will start at 7:00 PM. All games on Monday will be televised by ESPNU.