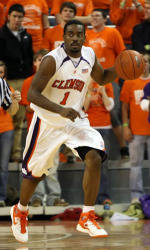 Quick Facts  Since Oliver Purnell became the Clemson Head Coach in 2003-04, the Tigers have faced Virginia Tech and Seth Greenberg six times. All six games have been decided by five points or less and five of the six have come down to the last possession.

 K.C. Rivers became Clemson’s winningest player when he played in the victory over Gerogia Tech. That was his 85th victory as a Tiger, one more than Elden Campbell and Cliff Hammonds.

 Rivers needs just six points to reach 1500 for his career. He will become the ninth player in Clemson history to reach 1500 points, the first to reach that mark since Terrell McIntyre, who was a senior in 1998-99 and finished with 1839.

 Clemson sophomore Jerai Grant has 31 blocked shots in 293 minutes this year, a blocked shot every 9.45 minutes. That is on pace to be the seventh best blocked shots per minute figure in Clemson history. He is fifth in the ACC in blocked shots.

 Clemson is the only school in the nation ranked in the top 10 in blocked shots and steals.