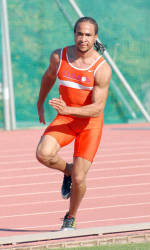 Clemson, SC – The 11th-ranked men’s track & field team will travel to Blacksburg, VA to compete in Virginia Tech’s Elite Meet on Friday and Saturday at the Rector Field House. This marks Clemson’s second competition at the Hokies’ indoor facility this season. The men’s team fared well in the January 12 meet, as the Tigers won two individual events and the 4x200m relay.

The competition opens Friday for the Tigers, with red-shirt freshman C.J. Spiller. The 60m final is set for 6:30 PM.

Brandon Carter and Miller Moss are scheduled for the high hurdles at 5:25 PM, while Corey Brown and Cowin Mills are entered in the 400m dash at 6:00 Friday. Clemson will enter a distance medley relay team Friday at 7:50 PM, while Jonathan Sunde is set for the 5000m competition at 8:20 PM.

Scott Pauga gets the Saturday action started in the high jump. The event is scheduled for 11:30 AM. Alex Padgett will compete in the shot put at noon. He had his top distance in that event earlier this year at Virginia Tech on January 12. Mitch Greeley, who won the pole vault at the Virginia Tech Invitational in January, will again compete at noon in the event. Chris Spear, last week’s winner at the Carolina Classic, will join the senior. Greeley is already an NCAA qualifier provisionally as well.

Andrew Porter and Jasen Turnbull will compete in the 800m run at 2:50 PM. Porter holds the team’s top time in that event so far this season. Trenton Guy, who won the 200m dash on January 12 in Blacksburg, will compete in the invitational section at 3:25 PM Saturday along with Brown and Padgett.

Sam Bryfczynski and Bryce Iverson lead Clemson’s efforts in the 3000m run, which is scheduled for 3:45 Saturday. Those two competitors hold the team’s top two times in the 5000m so far this indoor season.

The 4x400m relay team will close out the competition for the Tigers on Saturday afternoon at 5:00 PM.