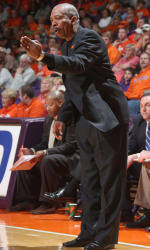 Quick Facts  Duke has won 22 of the last 23 games in the series with Clemson, but the Tigers won the last meeting, at the ACC Tournament in Charlotte last year. Clemson won 78-74 to move on to the championship game against North Carolina. It was Clemson’s first win in the ACC Tournament semifinals since 1962.

 Clemson has not beaten Duke at Clemson since the 1996-97 season, an 86-82 win in overtime. That was the same score Clemson beat Virginia Tech.

 K.C. Rivers went over the 1500 point mark in the win over Virginia Tech. He now has 1523 for his career and is the ninth player in Clemson history to go over 1500 points. He needs just five three-point goals to become Clemson’s all-time leader. Terrell McIntyre had 259 and Rivers has 255.

 Clemson and Duke are both in the top 10 of the AP poll. This is the second time this year, but just the sixth time in school history two top 10 teams have met at Littlejohn Coliseum. Clemson and Wake Forest were both ranked in the top 10 entering the Jan. 17 game at Clemson.

 Clemson is the only school in the nation ranked in the top 10 in both steals and blocked shots.

 Duke is ranked 10th in the nation in field goal percentage defense and Clemson leads the ACC in three-point goals made per game.