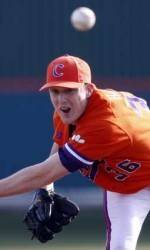 Freeman had three of Clemson’s nine extra-base hits (five doubles, two triples, two homers) in the game, as the Tigers scored in seven of the eight innings in which they batted. The Tigers also totaled 15 hits in the game, including at least one by 10 different players. A six-run second inning gave Clemson a commanding lead, which it never relinquished.

Tiger starter Casey Harman (5-0) earned the win in 6.0 solid innings. He allowed just four hits, one run, and three walks with a career-high-tying 10 strikeouts. Tomas Cruz yielded two hits and one run with three strikeouts in 3.0 innings pitched to record his first save of the year.

Mike Dennhardt (1-5), the first of five Eagle pitchers, suffered the loss, as he gave up six runs on five hits in 1.1 innings pitched.

Mickey Wiswall gave Boston College a 1-0 lead in the top of the first inning when he hit a two-out, solo homer to right field, his sixth long ball of the season.

Clemson responded with a run of its own in the bottom of the first inning. Freeman walked with one out and went to third on Jeff Schaus’ single through the left side. Kyle Parker followed with a sacrifice fly to right to plate Freeman.

In the second inning, Clemson took the lead with six runs. Brad Miller led off with a walk. Two batters later, John Nester belted a double down the left-field line to score Miller. Will Lamb reached on an infield single that allowed Nester to score and Chris Epps lined a double to left-center to score Lamb. Freeman added to the Tiger lead when he followed with a double to right field to score Epps. Two batters later, Wilson Boyd lined a two-out double to right field to plate Freeman and Schaus. It was Clemson’s fourth double of the inning and gave the Tigers a 7-1 lead.

Clemson kept the pressure on in the third inning. Epps drew a one-out walk and scored on Freeman’s double to right-center.

In the fourth inning, Miller hit a one-out triple down the right-field line and scored on John Hinson’s sacrifice fly to center.

The Tigers reached double-digits in runs in the fifth inning when Freeman hit a two-run homer to right-center, his third home run of the season. Epps, who walked, also scored on the play.

In the sixth inning, Miller lined a solo homer to left-center, his second home run of the season.

In the top of the eighth inning, Wiswall led off with a walk and moved to second on John Spatola’s single through the right side. Two batters later, Wiswall scored on a wild pitch with two outs.

Clemson added three insurance runs in the bottom of the eighth inning. Hinson hit a one-out single through the right side. After Addison Johnson lined a triple down the right-field line to score Hinson and Kieboom. Two batters later, Schaus singled to right-center to score Johnson.

Freeman had three hits and four RBIs, both game-highs, for the Tigers, while Miller went 2-for-3 with a homer, triple, three runs, and two walks.

Spatola had a team-high two hits for the Eagles, who had six hits in the game. Wiswall scored both of Boston College’s runs as well.

Clemson and Boston College will play game-two of the three-game series on Saturday at 6:30 PM.