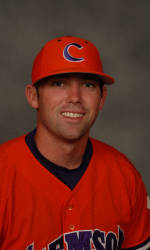 Senior righthander Nick Godwin pitched 7.2 scoreless innings to lead #10 South Carolina to a 6-0 victory over Clemson on Wednesday night in front of 5,938 fans at Doug Kingsmore Stadium. The Gamecocks, who won all four matchups in 2008, improved to 27-10. The Tigers, who suffered their first shutout of the season, fell to 18-19.

Godwin improved to 4-2 on the season, as he threw 7.2 scoreless innings, allowing three singles and three walks with seven strikeouts. Justin Sarratt (1-2) suffered the loss in his first career start, as he allowed nine hits and five runs in 3.1 innings pitched. Trey Delk pitched 5.2 solid innings out of the bullpen. The former Gamecock pitcher allowed just four hits, no earned runs, and one walk with three strikeouts.

The Gamecocks got on the scoreboard first with a run in the third inning when James Darnell hit a sacrifice fly to center that scored Whit Merrifield, who led off the inning with a single.

South Carolina took a 6-0 lead in the fourth with five runs on five extra-base hits. Justin Hopper and Scott Wingo hit one-out, back-to-back solo homers. It was Hopper’s first career home run and Wingo’s second long ball of the season. Reese Havens then doubled down the right-field line before Merrifield drove him in with a double to left-center. With two outs, Darnell drove in another run with a double to left. Left-fielder Jeff Schaus then dropped a flyball hit by Phil Disher that allowed Darnell to score.

The Gamecocks, who totaled 13 hits, were led by Darnell, who had two doubles and two RBIs. Havens and Merrifield added three hits apiece. Three Tigers tallied one hit apiece.

Wilson Boyd received the 2008 Bob Bradley Award for the second year in a row. The award is given to the Clemson MVP of the four-game series with South Carolina. Boyd was 6-for-16 (.375) in four games.

Godwin won the Tom Price Award for the Gamecocks, as he earned both midweek victories.

Clemson will travel to Durham, NC to play at Duke in a three-game series starting Friday at 7:00 PM.