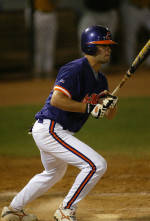 The Yellow Jackets totaled seven doubles and three home runs in the game. A day after setting a career high with six RBIs, Wes Hodges had seven RBIs on Sunday thanks to two doubles and a home run. Fifteen different Yellow Jackets had at least one hit.

The Tigers were led offensively by Travis Storrer, who had two home runs and three RBIs. Brad Chalk had three hits for the second-straight game as well.

Freshman lefthander David Duncan (4-1) allowed three runs on eight hits with five strikeouts in 6.0 innings pitched to earn the win. Tiger starter Stephen Faris (4-1) suffered his first loss of the season, as he allowed six runs on six hits without getting out of the first inning. Clemson used seven pitchers in the game, while the Tiger defense committed five errors.

After Clemson’s first three batters reached base in the first inning without putting any runs on the board, the Yellow Jackets came out swinging and scored six runs in the bottom of the first. Danny Payne led off with a double to right-center and went to third on Steven Blackwood’s single to center. Matt Wieters hit the ball hard again to center for a single that scored Payne. Jeff Kindel walked to load the bases. Whit Robbins hit a pop up to shallow right-center that allowed Blackwood to score on the sacrifice fly. Hodges followed with a double over third-baseman Herman Demmink that plated Wieters and Kindel. Luke Murton then lined a single up the middle to score Hodges. After Murton advanced to third on Michael Fisher’s single through the right side, Murton scored on a wild pitch off reliever Ryan Hinson.

Marquez Smith led off the second with a single to right and Storrer followed with a two-run home run to right field.

Georgia Tech kept the heat on in the bottom of the second and added three more runs. Blackwood and Wieters led off with walks. Kindel’s fly ball to right-center moved Blackwood to third and Robbins flied out to shallow left field for out #2. But Hodges hit a soft liner to shortstop Stan Widmann. Widmann could not make the shoe-string catch and the ball went into left field for an RBI double. Murton followed with a double just over Chalk’s glove in centerfield to score Wieters and Hodges.

In the fourth inning, Kindel was hit by a pitch to lead off the inning. Robbins followed with a single through the right side to advance Kindel to third. Hodges then hit a three-run homer to right-center, his ninth of the season.

The fifth inning saw the Yellow Jackets add two more runs to their lead thanks to a Tiger error. Wieters and Kindel hit one-out singles, and Robbins loaded the bases with a walk. Hodges then hit a groundball to Widmann at short. He threw to Taylor Harbin at second for the force, but Harbin’s throw to first, which would have been in time for the inning-ending double play, was wide, allowing Wieters and Kindel to score.

Storrer hit a two-out, solo home run to right-center in the sixth inning, his second of the game and fourth of the season. It was also the senior’s first career multi-homer game.

In the seventh inning, a walk by Demmink and back-to-back singles by Chalk and Harbin loaded the bases with one out. Tyler Colvin hit into a fielder’s choice, allowing Demmink to score.

Pinch-hitter Wally Crancer hit a two-run homer to right field in the eighth inning, as Brad Feltes also scored on the play after being hit by a pitch. It was Crancer’s fourth long ball of the season. Pinch-hitter Ryan Tinkoff followed with a double down the left-field line and scored on pinch-hitter Russell Harben’s single through the left side. After pinch-hitter Chris House walked, pinch-hitter Jason Haniger hit a run-scoring single through the left side to plate Harben. Later in the eight-run inning, Nick Scherer hit an RBI double and Brad Feltes added a three-run home run to right-center, his first of the year.

Clemson will play host to Winthrop on Tuesday at 7:15 PM.