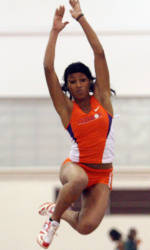 Women’s Track & Field Moves to No. 6 in Latest USTFCCCA Rankings

CLEMSON, SC – The women’s track & field team moved up one spot to No. 6 in the latest national rankings released by the U.S. Track & Field and Cross Country Coaches Association. The Tigers had been No. 7 in each of the previous two rankings.

Oregon checked in as the new No. 1 team in the nation, followed by Texas A&M, Florida, Tennessee and Arkansas. The Tiger program is the highest ranked among four ACC schools. Virginia Tech is No. 20, Florida State is No. 21, and Miami entered this week’s rankings at the No. 23 position.

The Clemson women are also ranked No. 1 among schools in the Southeast region, ahead of Louisville, South Carolina, North Carolina and Virginia. The Tiger men’s team is No. 5 in the region as well.

Clemson boasts one automatic qualifier and 13 provisional qualifiers for the 2010 NCAA Indoor Championships, which will be held next month in Fayetteville, AR. The highest performer on the national event lists is Patricia Mamona, who currently holds the nation’s third-best triple jump at 45’0.5″. She also ranks second in Clemson history in the event. She is the Tigers’ lone auto qualifier.

Of the provisional qualifiers, Brianna Rollins ranks among the top 13 on the national performance lists in both the 60m hurdles (6th) and 200m dash (13th). Her time of 8.17 in the 60m hurdles at the Clemson Games was a school record and just three hundredths shy of an automatic qualifying time for NCAAs.

April Sinkler is ranked among the national top 10 in a pair of events. She holds the nation’s sixth-best mark in the triple jump with a distance of 43’7.25″, which she achieved at the Virginia Tech Invitational in January. Sinkler also ranks eighth in the long jump with a mark of 20’8.5″ at the same meet.

Kim Ruck moved into the national ranks over the weekend in the 5K. The Greer, SC native posted what was then the fastest time in the country at 16:11.49 when she won the Tyson Invitational 5K on Friday evening. Her time currently ranks 11th, but she remains in strong position to earn an at-large bid to the NCAA national meet.

The 4x400m relay, arguably the most improved event of the indoor season thus far, is ranked among the nation’s best as well. The group of Brittany Pringley, Rollins, Sonni Austin and Jasmine Edgerson – four first-year freshmen – clocked a provisional time of 3:36.17 last weekend.

The Tiger Tuneup will be held at home this week, and it will be the final meet prior to the ACC Indoor Championships, which run Feb. 25-27 in Blacksburg, VA.