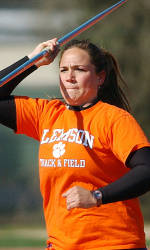 Women’s Track & Field Fifth After Day One at ACC Championships

Atlanta, GA – The women’s track & field team stands in fifth place after one day of competition at the ACC Outdoor Championships at the George C. Griffin Track Complex. Bethanie Wachna earned her first-ever All-ACC honor in the javelin throw Thursday to highlight the first day of action for Clemson, who has 11 points heading into Friday.

Wachna had a throw of 141’0″ on her first attempt in the final round, and the mark was good enough to hold off the rest of the field for a third-place showing. It marks the second straight year the Clemson women’s program has had an All-ACC performer in the javelin. Linda Buchholz, a freshman in 2007, finished third overall at the College Park, MD meet. Buchholz competed Thursday and finished seventh after a throw of 139’10”.

Caroline Kennedy and Rochelle Kokayko scored in their respective events with top-eight finishes. Kennedy, a sophomore, recorded a clearance of 12’1.5″ in the pole vault. She is fourth in school history in the event, and placed seventh Thursday. Kokayko had a hammer throw mark of 172’2″ and finished in eighth place. It marked a season-best for the junior native of Canada.

Buchholz and Liane Weber both competed in the first four events of the heptathlon Thursday. Weber is 10th overall in the standings with 2,818 points heading into the final day of competition. Her best event was the high jump, where she cleared a season-best 5’4.25″. Buchholz is 12th overall and has a total of 2,716 points with three events remaining. She also cleared 5’4.25″ in the high jump.

Sunday Ford was Clemson’s lone competitor in the 10,000m run late Thursday afternoon. The junior from Piedmont, SC finished 12th with a time of 37:58.37.

The Lady Tigers return to action Friday for the preliminaries for the running events. Also being held Friday will be the long jump and high jump.