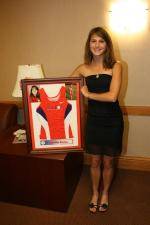 The Clemson women’s track & field team held its 2005-06 season awards banquet last Saturday at the IPTAY building. The coaching staff handed out MVP and Most Improved Awards for cross country and indoor track & field, as well as various dedication awards. The team also honored its senior class for the 2006 season.

Jenny Barton was honored as the Most Valuable Performer for the cross country team. She was Clemson’s top finisher in five of six events and set personal bests in both the 5K and 6K. She won the season-opening Gamecock Invitational and also earned ACC Performer of the Week honors on October 10 after an eighth-place showing at the Furman Invitational.

Barton was honored with the team’s Academic Achievement Award. A two-time member of the ACC Academic Honor Roll, she majors in biological sciences. Barton also was also a recipient of the Athletic Director’s Academic Excellence Award at the honor roll banquet earlier this year.

Patrice McMillan was named Most Improved for cross country. A middle distance runner by trade, she scored in five of the six events for Clemson last fall. Her best finish was 14th at the Furman Invitational. McMillan also was honored with the team’s Dedication Award for her efforts in the weight room.

Della Clark was honored as the Most Valuable Performer for the indoor season. She earned All-ACC honors with a third-place finish in the 20lb weight throw. Clark posted a personal-best effort of 62’0.5″ at the ACC Championships, which ranks second in school history in the weight throw.

Krystal Woods was named Most Improved for indoor track & field. The Warminster, PA native scored for the Lady Tigers in the weight throw at the ACC Championships and improved on her personal best in that event. She ranks third all-time in school history in the weight throw.

Casey Phillips received the Coaches Dedication Award. A dependable performer on and off the field of competition, Phillips is a three-time All-State honoree in cross country and two-time member of the ACC Academic Honor Roll.

Allison Bradshaw earned the weight room’s Dedication Award for indoor track & field. She ranked second on the squad in the shot put this season. Bradshaw was one of four seniors honored for their contributions over the last four years to the Lady Tiger track & field program. The others were Barton, Phillips, and Woods.

Sierra Hill was named the team’s 2005 Freshman of the Year. In her first year with the program, she posted regional-qualifying marks in the 400m hurdles and 4x400m relay, helping that team to an outdoor ACC title.

The team’s Most Valuable Performer and Most Improved awards for outdoor track & field will be decided after the season has been completed.